Chase Rice explains, “We love sharing the new music with our fans at festivals like Driftwood because the energy (of the crowd while on stage) is exactly why we got into music in the first place. A lot of the creativity that went into this new album was inspired by our fans and moments like those we have on stage…we can’t wait to share that experience with such an incredible setting. Craft beer and Country music, it doesn’t get any better.”Cameron Collins , Co-Founder & Director of Events at Brew Ha Ha Productions said, “ Driftwood was so well received last year that we’re bringing it back this Veterans Day weekend for two days of the best craft beer, country music and BBQ ever to hit the Pacific coastline!”

Driftwood at Doheny State Beach kicks off at 1:00 PM each day, with VIP early entry beginning at Noon. Festival attendees will choose from over 100 craft beers to taste until 4:00 PM (for those 21 and up), and will have the chance to enjoy the best of California’s BBQ . Three hours of unlimited craft beer tastings are included with admission. After 4:00 PM, fans under 21 years old are welcome. Music lasts until 9:30 PM on Saturday and 9:00 PM on Sunday. Craft beer, wine and cocktails will be available for those 21 and up to purchase throughout both days. 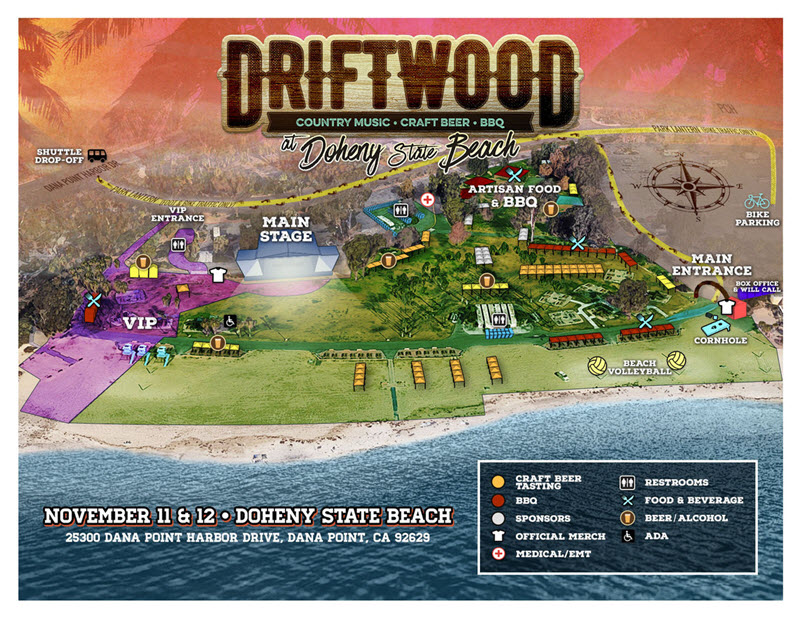 The daily music lineup for Driftwood at Doheny State Beach is as follows:

General Admission and VIP tickets will be available for purchase for the following prices. All tickets include craft beer tasting and access to view the music stage.

All VIP Tickets include access to a VIP Entry Lane and VIP Lounge, with:

– VIP viewing area of the stage

Parking at Driftwood at Doheny State Beach will be extremely limited, so attendees are strongly encouraged to carpool and rideshare.

Shuttle passes are available for only $10 per person, roundtrip. Parking is available (first come, first served) at the shuttle pick up at the Outlets at San Clemente (101 W. Avenida Vista Hermosa, San Clemente, CA 92672). Shuttles will run every thirty minutes from 11:30 AM – 10:00 PM between Outlets at San Clemente and Doheny State Beach . The shuttle will be free for active and retired military with ID. Visit www.DriftwoodFest.com for details. Free bike parking will also be available at Doheny State Beach .

For the most up-to-date information on Driftwood at Doheny State Beach , visit  DriftwoodFest.com.