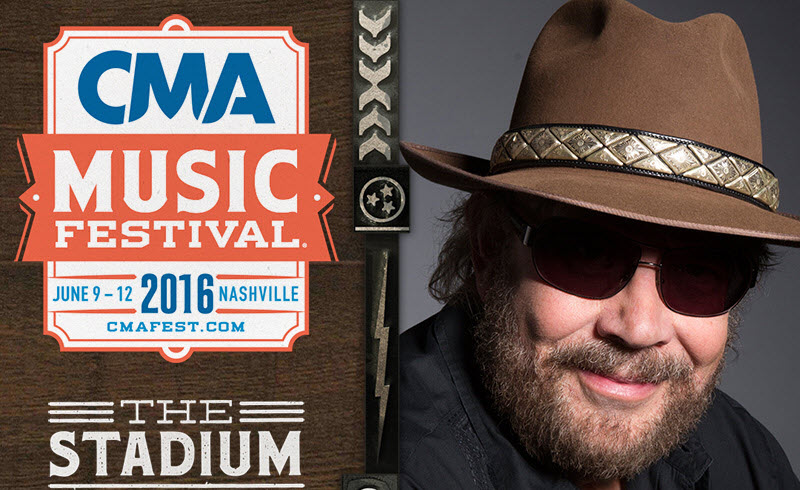 Hank Williams Jr. will entertain all of his rowdy friends during CMA Music Festival when he plays The Stadium Friday, June 10, joining Carrie Underwood, Chris Stapleton, Eric Church and Sam Hunt as part of the Friday night lineup.  He’ll also jam with an all-star lineup for the Life & Songs of Kris Kristofferson tribute show at Nashville’s Bridgestone Arena March 16.

Hank Jr. is on a hot streak of success with his 37th studio album It’s About Time (Nash Icon Records), which remains in the Top 20 after achieving the highest peak position of his career with a No. 2 position on Billboard’s Top Country Albums chart when it was released Jan. 15.

Hank Williams Jr.’s extremely impressive resume has spawned 70 million albums sold worldwide, six PLATINUM albums, 20 GOLD albums, 13 No. 1 albums and 10 No. 1 singles. Marking 52 years since his first album in 1964, Hank Jr. released IT’S ABOUT TIME (Nash Icon Records) on January 15. In addition to the history-making “Are You Ready for the Country,” the project includes new tunes such as “Dress Like an Icon,” “Just Call Me Hank,” “It’s About Time,” and “The Party’s On” as well as re-recorded versions of classics “Mental Revenge” and “Born to Boogie” with Brantley Gilbert, Justin Moore and Brad Paisley on guitar. IT’S ABOUT TIME is Hank Jr.’s 37th album in his five-decade career. He continues to add accolades to an extremely impressive resume, which includes ACM Entertainer of the Year, CMA Entertainer of the Year and BMI Icon in addition to winning a GRAMMY and being inducted into the Nashville Songwriters Hall of Fame. As a touring artist, Hank Jr. was a pioneer in bringing arena rock production values to country music, and he remains one of the most consistent ticket sellers in music, period, as generation after generation gets turned on to one of the most dynamic live performers ever to take the stage.