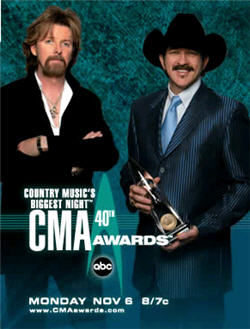 “The interest from the artistic community to be involved this year really demonstrates the excitement about the CMA Awards and overall appeal of Country Music,” said CMA Chief Operating Officer Tammy Genovese. “Country Music crosses genres and touches people with stories that speak to the heart and performances that touch the human spirit.”

The 40th Annual CMA Awards will be hosted by Brooks & Dunn and broadcast live from Nashville’s Gaylord Entertainment Center, Monday, November 6, 2006 (8:00-11:00 PM/ET) on the ABC Television Network. Sugarland received nominations for Horizon and Vocal Group of the Year, and Jennifer Nettles also picked up a solo nod for Musical Event of the Year with Bon Jovi for their duet “Who Says You Can’t Go Home,” marking the New Jersey-based rock group’s first CMA Awards nomination.

Little Big Town received their first CMA Awards nominations in 2006 including Horizon and Vocal Group of the Year.

Rounding out the Horizon Award category with Lambert, Little Big Town, Sugarland and Carrie Underwood is Josh Turner. Turner received his first CMA Awards nomination in the category in 2004.

“The depth and diversity of the Horizon nominees this year really speaks to the strength and future of the format,” Genovese said.

Actor, songwriting legend and member of the Country Music Hall of Fame Kris Kristofferson will introduce the 2006 Hall of Fame inductees.

Winners of “The 40th Annual CMA Awards” will be determined in the third and final round of voting by eligible voting members of the Country Music Association. CMA Awards balloting is officiated by the international accounting firm of Deloitte & Touche LLP.