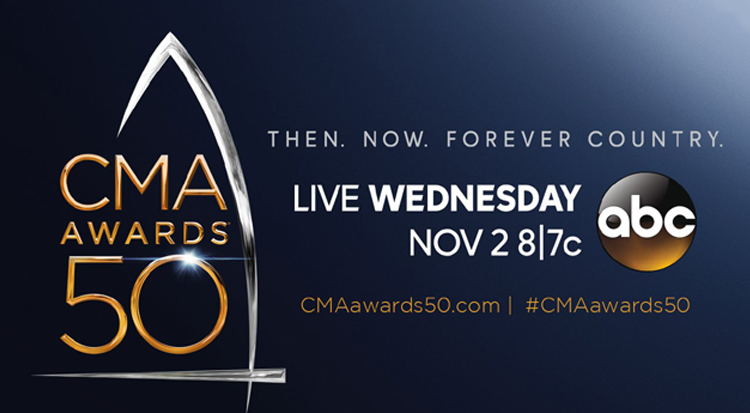 Entertainer of the Year
Garth Brooks

It was a celebration five decades in the making when winners were announced tonight during “The 50th Annual CMA Awards” live from Nashville.

The night’s big winner was Garth Brooks who now holds the record as having the most wins for Entertainer of the Year in CMA Awards history with five. Two individuals won multiple Awards including Chris Stapleton who collected trophies for Music Video and Male Vocalist of the Year, and Dann Huff who won Musician and Single of the Year for producing Thomas Rhett’s “Die a Happy Man.”

“I never thought I’d be able to come back. And when you come back you never think you’re going to get to hold one of these [CMA trophies] again,” Brooks told reporters backstage. He continued, “Awards are for younger artists so the older you get the more precious [they are].”

Thomas Rhett won the first trophy of the night for Single of the Year for “Die a Happy Man,” which was produced by Huff and Jesse Frasure and mix engineered by Justin Niebank. The second single from his album Tangled Up, the song spent 17 weeks at No. 1 on Billboard Hot Country Songs chart.

CMA Song of the Year was awarded to Lori McKenna for her solo composition “Humble and Kind.” McKenna won the same category in 2015 for “Girl Crush.” The song was essentially a primer for McKenna’s five children – a list of life lessons. McGraw performed the song with emotional intensity during the broadcast.

Morris was named CMA New Artist of the Year – her first Award. The “My Church” firebrand was emotional as she thanked the audience and recounted how just one year ago, she watched the broadcast from a bar down the street. Morris moved to Nashville at 20 with a goal of becoming a working songwriter. She eventually changed her mind and spent 2016 touring with Keith Urban.

Church won his second CMA Album of the Year trophy for Mr. Misunderstood, which was produced by Jay Joyce and Arturo Buenahora, Jr. A surprise album that was announced and released during “The 49th Annual CMA Awards,” Mr. Misunderstood debuted at No. 3 and peaked at No. 2 on Billboard’s Top Country Album chart in November 2015.

Taking home their fifth consecutive Vocal Group of the Year title was Little Big Town. The quartet performed their latest single, “Better Man,” during the broadcast and recently revealed the song was penned by former CMA Female Vocalist and Entertainer of the Year Taylor Swift.

Underwood won her fourth CMA Female Vocalist of the Year trophy. She won the Female Vocalist category in 2006-2008. After thrilling fans across the U.S. with her “The Storyteller Tour” this year, Underwood will do the same for fans in Australia and New Zealand when she joins Keith Urban’s world tour in December.

Stapleton won CMA Male Vocalist of the Year for the second year in a row. Earlier in the day, he won CMA Music Video of the Year with director Tim Mattia for “Fire Away.” Stapleton plays a supporting role as a bartender in the harrowing video, which follows a young couple from happy times through anguish as the woman makes two suicide attempts. This is Stapleton’s first win in the Music Video category.

“Everything happened very organically with that video,” Stapleton said to press backstage. “It’s something that hopefully has value beyond me and the video. That’s why I like it.”

“Wow, what a tribute,” Parton said. “That was so touching. I would have cried but I didn’t want to mess up my eyelashes.”

Kenny Chesney received the CMA Pinnacle Award in a presentation hosted by retired NFL favorite Peyton Manning. The Pinnacle Award has only been presented three times in CMA history. Previous recipients include Brooks and Swift.

Bentley won Musical Event of the Year with King for “Different for Girls,” which was announced on ABC’s “Good Morning America” by anchor Lara Spencer. Written as a testament to women’s emotional strength, the song became what Bentley called a “centerpiece” of his recent album Black. The song peaked at No. 1 on the Billboard Country Airplay chart in September. This marks Bentley’s third CMA Award and King’s first.

In pre-televised Awards hosted by duo Dan + Shay, Dann Huff was named CMA Musician of the Year. Huff has been nominated 17 times in the category and this is his third win including 2001 and 2004.