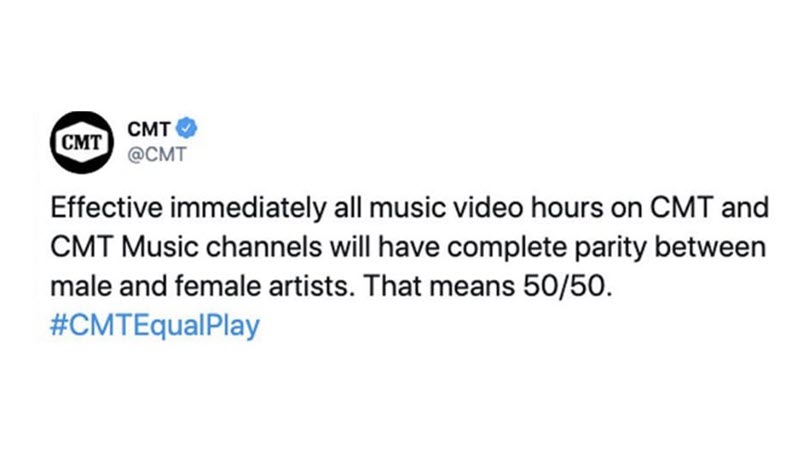 CMT has pledged complete parity between male and female artists and will now split videos 50/50 between the genders.  “Time is really up in 2020! All the talk around what can be done to support females in country music needs to transform into action, once and for all,” shared Leslie Fram SVP of Music & Talent, CMT. “At CMT, we are stepping up our own commitments, in addition to our work through the CMT Next Women of Country franchise, and will be announcing a new initiative in the coming weeks that will spark this much-needed change in our industry.”

Effective immediately all music video hours on CMT and CMT Music channels will have complete parity between male and female artists. That means 50/50. #CMTEqualPlay

As reported by Billboard, CMT’s decision comes just weeks after a new study showed a staggering imbalance of gender representation at country radio. The study, titled Gender Representation on Country Format Radio, reports that the ratio of spins by males to female artists in 2018 was 9.7:1 with spins for women averaging 4% at its best in the overnight hours (12:00 – 6:00 a.m.) and 1.7% at its worst in the morning (6:00 – 10:00 a.m.) when listenership spikes.

Research shows that women receive drastically less spins than men throughout the 24-hour cycle. “When the bulk of radio’s listening audience is tuning in, not only do they hear fewer songs (in general), but they also hear few women (specifically),” adjunct professor Jada Watson from the University of Ottawa writes in the study. “It would be entirely possible that a station’s listeners could commute to or from work and not hear a single song by a women.”

.@CMT has pledged complete parity between male and female artists and will now split videos 50/50 between the genders. Let us know your thoughts! #CMTEqualPlayClick To Tweet

Concert in Your Car : Texas Country