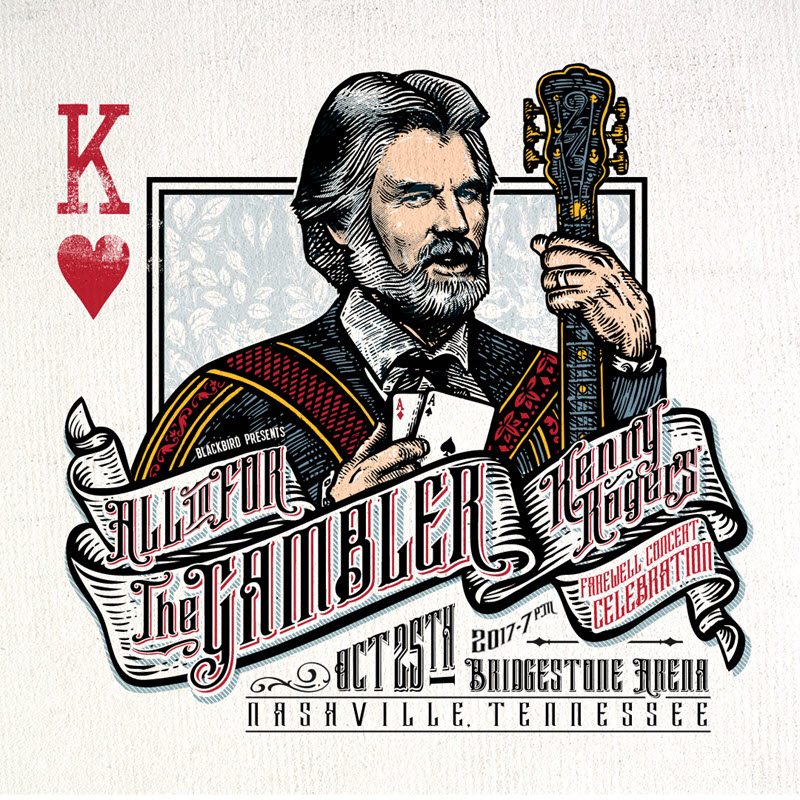 “All In For The Gambler: Kenny Rogers’ Farewell Concert Celebration,” an all-star concert event taping at the Bridgestone Arena in Nashville, Tennessee on Wednesday, October 25, 2017 at 7PM CT, will feature the final performance together by Kenny Rogers and Dolly Parton.  This once-in-a-lifetime concert event will honor Kenny Rogers’ historic 60-year career.

News Update:  Reba McEntire, Chris Stapleton, Lady Antebellum and Wynonna Judd have been added to the momentous lineup for “All In For The Gambler: Kenny Rogers’ Farewell Concert Celebration.” In addition, The Judds (Wynonna and Naomi Judd) will reunite for an unforgettable performance.

The final block of tickets is now available via Ticketmaster.com, by phone at 800-745-3000, all Ticketmaster locations and the Bridgestone Arena box office. A portion of the proceeds will benefit the T.J. Martell Foundation and the Kenny Rogers Children’s Center.

“As I’m bringing this chapter of my career to a close, this will be an unforgettable way to celebrate with my talented friends, who I’m so grateful to have crossed paths with,” says Kenny Rogers. “It means so much that they would feel compelled to do this for me. Of course, the night would not be the same without Dolly Parton being part of it. We’ve enjoyed a special friendship for decades, and I’ll forever look back fondly on the many collaborations, performances, and laughs we’ve shared as some of the most extraordinary moments of my career. I know it will be a moving experience for us standing on that stage together for one last time.”

This one-night-only concert event taping will bring together fans, friends and music icons to celebrate Kenny Rogers. “ All In For The Gambler” will feature performances by Kenny Rogers, Dolly Parton, Little Big Town, Alison Krauss, The Flaming Lips, Idina Menzel, Jamey Johnson, Elle King and many other special guests to be announced in the coming weeks. 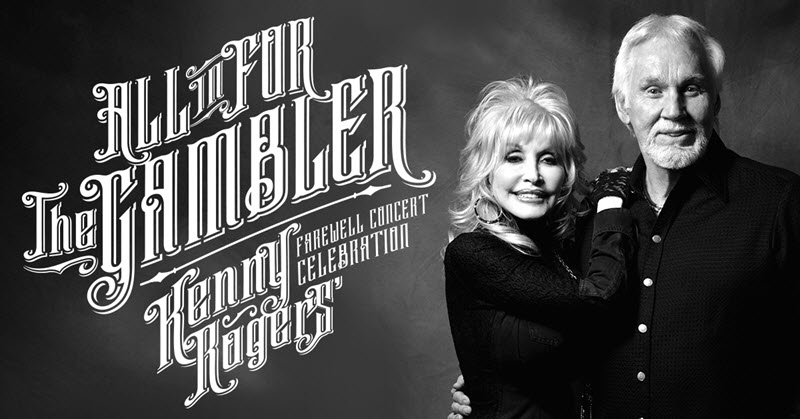 “Kenny is like a family member to me. We have been friends for over 30 years and made musical magic together. Since 1983, when we released ‘Islands In The Stream,’ everyone has had an expectation to see Kenny everywhere I go and me with him wherever he goes,” says Dolly Parton. “Well, I guess for many of those fans that wanted to see us together, this will be that night. Performing with Kenny for the last time ever on October 25th is going to be emotional for both of us, but it’s also going to be very special. Even though Kenny may be retiring, as he fades from the stage, our love for each other will never fade away.”

Tickets go on sale July 21, 2017 at 10AM CT online at Ticketmaster.com, by phone at 800-745-3000, all Ticketmaster locations and the Bridgestone Arena box office. A portion of the proceeds will benefit the T.J. Martell Foundation and the Kenny Rogers Children’s Center.

In a career that has spanned more than six decades, Kenny Rogers has left an indelible mark on the history of American music. His songs have endeared music lovers and touched the lives of millions around the world. Chart- topping hits like “ The Gambler,” “Lady,” “Islands In The Stream,” “Lucille,” “She Believes In Me,” and “Through the Years” are just a handful of Kenny Rogers’ songs that continue to inspire new generations of artists and fans alike. Rogers, with twenty-four number-one hits, is a Country Music Hall of Fame member, six- time CMA Awards winner, three-time GRAMMY® Award winner, recipient of the CMA Willie Nelson Lifetime Achievement Award in 2013, CMT Artist of a Lifetime Award honoree in 2015 and has been voted the “Favorite Singer of All Time” in a joint poll by readers of both USA Today and People.

Blackbird Presents’ Keith Wortman, creator and executive producer of Nashville’s recent highly acclaimed “Sing Me Back Home: The Music of Merle Haggard,” is the creator and executive producer of “ All In For The Gambler. ” GRAMMY® Award Winner Don Was will serve as music director, and preside over a stellar house band backing the performers at this historic concert event taping. Kenny Rogers’ manager, Ken Levitan, also serves as executive producer. The event will be filmed and recorded for multi-platform distribution throughout traditional media (worldwide broadcast, music, and digital).

“Like millions of fans around the world, Kenny Rogers has been the soundtrack of my life. As he finishes out this beautiful victory lap of touring life, I am honored and privileged to create and produce a show celebrating this special artist on this monumental occasion, ” says Keith Wortman, CEO of Blackbird Presents. 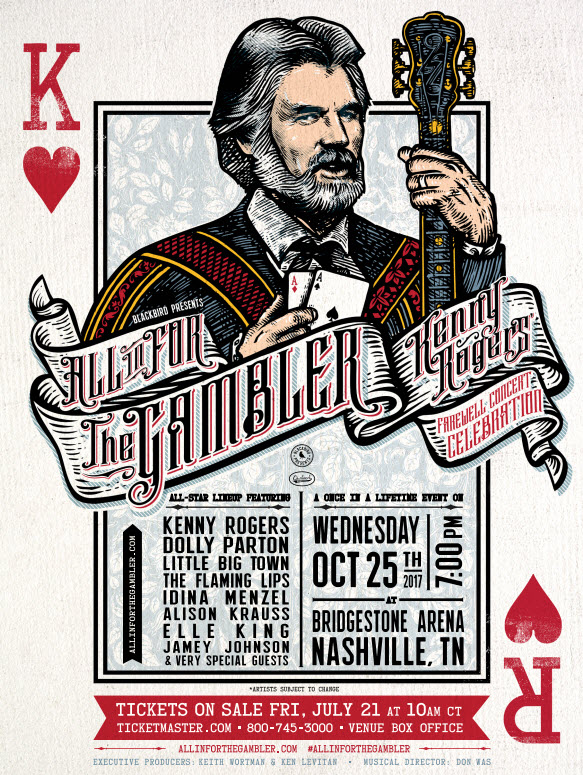 Kenny Rogers began recording in the late 1950s, notching a local hit in the Houston, TX market with “That Crazy Feeling” that resulted in a national TV appearance on “American Bandstand.” After stints with the jazz group the Bobby Doyle Three and folk favorite The New Christy Minstrels, Rogers formed The First Edition in 1967. As the lead singer of the group, Rogers sang on the band’s biggest hits, such as “Just Dropped In (To See What Condition My Condition Was In)” and “Ruby, Don’t Take Your Love To Town.” The group, who hosted their own syndicated television series, “Rollin’”, stayed together through 1975.

In 1976, Rogers signed a deal in Nashville with United Artists. With the help of producer Larry Butler, Rogers released “Lucille” in early 1977, his first No. 1 hit. The singer would tally many classics through the decade, including “Love Or Something Like It,” “Sweet Music Man,” “The Gambler,” and “Every Time Two Fools Collide,” which he recorded with the late Dottie West. Rogers was named Male Vocalist of the Year by both the CMA and the ACM, being also recognized as Entertainer of the Year by the latter in 1979.

In 1980, Rogers made musical history with his cross-over success of “Lady.” The Lionel Richie composition netted the singer a hit in the Country, Pop, AC, and R&B fields. The album from which the song was pulled, Kenny Rogers’ Greatest Hits , was certified Diamond for sales of over ten million units. In the 1980s, he stayed on top of the charts with hits like “I Don’t Need You,” “We’ve Got Tonight,” and “Morning Desire,” and sang on the GRAMMY® winning USA For Africa charity single, “We Are The World,” joined by an unprecedented number of music legends. He also established a successful career as an actor – with roles in The Gambler movie series – and as a photographer, with several published books of photos to his credit, including “This Is My Country.”

Rogers has sold over 120 million albums worldwide during his career, making him one of the best-selling male artists of all-time according to the RIAA, with twenty Platinum albums and eleven Gold. He has won awards from every organization imaginable, including multiple GRAMMY® Awards, as well as CMA, ACM, CMT, TNN, Music City News, and American Music Awards. In 2012, Rogers released his successful memoir, “Luck or Something Like It” and became a New York Times Best-Selling Author. In the fall of 2013, Rogers was bestowed with his biggest honor, being inducted as a member of the Country Music Hall of Fame and Museum in Nashville. He continues to endear himself to audiences through his timeless music, and appearances on television – including a well-received Geico commercial in 2015.

In the fall of 2015, Kenny Rogers made headlines with the announcement that he would soon embark on a farewell tour – after one of the most successful and iconic careers in the history of show business. The spring of 2016 saw the singer begin that process with his “The Gambler’s Last Deal” Final World Tour, saying goodbye to his loyal legion of fans one city and one night at a time in what has been a critically-acclaimed night of music and memories.