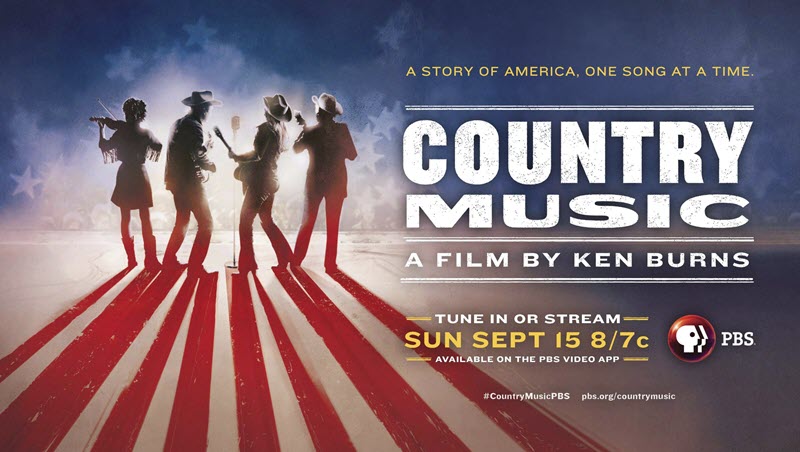 Explore the history of a uniquely American art form: country music. From its deep and tangled roots in ballads, blues and hymns performed in small settings, to its worldwide popularity, learn how country music evolved over the course of the 20th century, as it eventually emerged to become America’s music. Country Music features never-before-seen footage and photographs, plus interviews with more than 80 country music artists. The eight-part 16-hour series is directed and produced by Ken Burns; written and produced by Dayton Duncan; and produced by Julie Dunfey.

Country Music explores questions –– such as “What is country music?” and “Where did it come from?“–– while focusing on the biographies of the fascinating characters who created and shaped it — from the Carter Family, Jimmie Rodgers and Bob Wills to Hank Williams, Patsy Cline, Johnny Cash, Merle Haggard, Loretta Lynn, Charley Pride, Willie Nelson, Dolly Parton, Emmylou Harris, Garth Brooks and many more — as well as the times in which they lived. Much like the music itself, the film tells unforgettable stories of hardships and joys shared by everyday people.

The film follows the evolution of country music and its players over the course of the twentieth century, as it eventually emerged to become America’s music, focusing on artists such as Garth Brooks, the Carter family, Johnny Cash, Loretta Lynn, Willie Nelson, Dolly Parton, Hank Williams, and many more. The film is directed and produced by Ken Burns; written and produced by Dayton Duncan; and produced by Julie Dunfey—Emmy-award winning creators of PBS’s most-acclaimed and most-watched documentaries for more than a quarter century, including The Civil War, Lewis & Clark: The Journey of the Corps of Discovery, The National Parks: America’s Best Idea, and many more.

“Ken Burns is a master storyteller who brings history to life in powerful ways,” shared Belmont president, Dr. Bob Fisher. “By selecting country music as his most recent endeavor, he brings renewed attention on the art form and the region that employs and supports so many Belmont alumni. We are honored to help underwrite this film and to sponsor a Nashville premiere at the Grand Ole Opry House, which helped birth this amazing genre.”

Explore the history of Country Music - @KenBurns #CountryMusicPBS documentary premieres Sun Sept 15 at 8/7c on @PBS and streaming at https://www.pbs.org/kenburns/country-music/Click To Tweet

Ken Burns is an American filmmaker, known for his style of using archival footage and photographs in documentary films. His widely known documentary series include The Civil War, Baseball, Jazz, The War, The National Parks: America’s Best Idea, Prohibition, The Roosevelts, and The Vietnam War. For more than three decades, Ken Burns and his colleagues at Florentine Films – directors, writers, producers, editors, and cinematographers – have produced some of the most critically acclaimed and most watched documentaries on public television. Ken’s films have won fifteen Emmy Awards and two Oscar nominations, and in September of 2008, at the News & Documentary Emmy Awards, Ken was honored by the Academy of Television Arts & Sciences with a Lifetime Achievement Award.