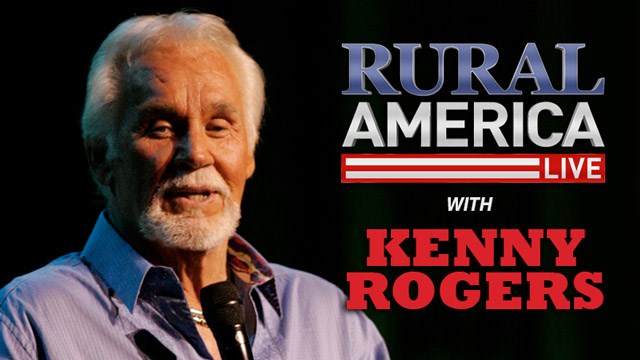 Kenny Rogers will appear on RFD-TV’s Rural America Live tonight (July 6 10pm ET/9pm CT) to discuss his life, legacy, current final world tour, “The Gambler’s Last Deal” and plans for the future. Known for his instantly identifiable raspy vocals and an extraordinary ability to vividly inhabit each song he performs, Rogers has enjoyed great success during his storied career of nearly six decades with over 120 million albums sold and 24 Number One hits. He recently sat down with RFD-TV anchor Christina Loren to tape the one hour special.

“I really enjoyed sitting down with Christina for a great conversation,” said Kenny Rogers. “She was very thoughtful in her questions. In looking back over my career as I prepare to retire from the road, it was fun for me to relive some of the moments brought up in the interview that I don’t think about all that often. I can’t thank the fans enough for all of their support. It’s allowed me to do what I love all of these years.”

“Before the cameras started rolling Kenny let me know that no subject was off-limits. As the story of his remarkable life unfolds, he fearlessly opens up about his greatest moments along with moments of weakness,” said RFD-TV anchor, Christina Loren. “I think that viewers will get a better picture of Kenny Rogers from this interview than ever before as he honestly recaps his legendary career from start to finish.”

Kenny Rogers is a legendary music icon; one of the elite few who is instantly recognized around the world. A groundbreaking recording artist, distinctive vocalist and consummate entertainer, Rogers has played to millions of fans around the globe and has charted a record in each of the last seven decades. The first country artist to consistently sell out arenas, Rogers was inducted into the Country Music Hall of Fame in 2013. He also enjoyed incredible crossover success — his 28 Billboard Adult Contemporary Top 10’s is sixth-best all-time, and fourth-best among men, trailing only Elton John, Neil Diamond, and Elvis Presley. Rogers’ smash hit, “The Gambler,” became a TV movie, starring Rogers himself in the title role as Brady Hawkes. The movie spawned four follow-ups, making it the longest running miniseries franchise on television and launched a second career for Rogers as an actor on television and film.