Lee Ann Womack is currently on a Stars for Stripes tour to visit troops in Italy and Germany. Stars for Stripes President/CEO Judy Seale is with Lee Ann as they head for the “Homefront Celebration” for US troops in Vicenza, Italy on June 14. Here’s our next update from Judy:

We departed the hotel for Landstuhl a bit later than scheduled due to some “hair dryer” issues. Electrical appliances are always a challenge overseas.

Brigadier General Frutiger’s wife, Jan, met us at Landstuhl Medical Center along with several other men and women who were assigned as our escorts. Our first stop was the dining room where we had lunch with the men and women working at the facility. Since this was mine, Lee Ann’s and Courtney’s first visit to the facility, we had lots of questions. Courtney’s brother was in the Marines and was injured in Iraq. He was taken to Landstuhl where he remained in intensive care for quite some time. This was a special treat for her to be able to see where her brother stayed and meet some of the wonderful doctors and nurses who took such good care of him. Her brother is now out of the marines with a medical discharge and doing great. After lunch, we began visiting the various wards. I’ve been to Walter Reed and Bethesda many times and Lee Ann and Courtney have visited there before as well. But, it’s much different at Landstuhl. The injuries are “fresh” as these men and women are flown in directly from Iraq and Afghanistan as quickly as possible after the incident occurs. But, I have to say, the morale, the focus, the dedication to “duty” and the overwhelming desire to return to their Company, Unit Battalion, whatever – is the same. No matter what the injury, the one thing they all worry about is that they have left their fellow “soldiers, marines, sailors, airmen/women” behind and they want to go back over and finish the job. They all believe very strongly that they have made tremendous progress in bringing Iraq and Afghanistan forward to being free and democratic societies and they intend to finish the mission.

I met three Marines today who were deployed to Camp Habbinayah, Iraq. That is the remote camp where Charlie Daniels visited in April – very near Fallujah. It is also the Camp where my partner – SemperComm – set up the communications system and we met the SemperComm Award Winners who designed the Bocce Ball court. All 3 were injured after our visit and one of them even got to see Charlie’s little acoustic performance at their Camp in April! We visited with approximately 20 men and women but not all of them had “war” injuries. There was a beautiful young lady who had a kidney stone removed and some other men who had various injuries that did not occur in Iraq or Afghanistan. Lee Ann was so warm and gracious to everyone she met. She signed a photograph, took a photo with them, autographed a CD and also gave them one of her coins. I gave them my SFS calendar and coin plus an EZScores calling card. Lee Ann also stopped and visited with the nurses and doctors who were caring for the patients on each floor.

We were allowed to go into ICU and visit with the patients there as well. That one is much tougher, but again, no matter how severe their injuries, they still talk about going back to Iraq or Afghanistan. We were supposed to spend one hour visiting the patients but actually stayed much longer. 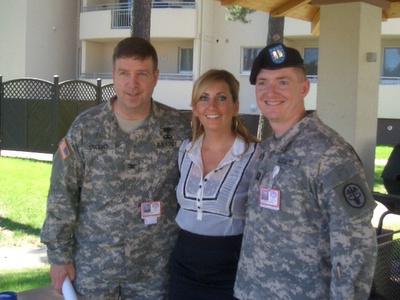 After visiting the medical center, we visited the Fisher House and met a lot of the families who are staying in that facility while visiting their loved ones at the medical center. There are actually two Fisher Houses on the property and we got to take the tour of the facilities. The accommodations are wonderful and the staff that we met were all so nice. Fisher House provides a MUCH-NEEDED service to our U.S. Military. The relatives are able to stay at the Fisher House for as little as $10 per night instead of having to stay at a local hotel.

It’s hard to put into words the emotions that we run through during the course of these visits. We always leave there feeling so “uplifted” rather than depressed. But, it is so emotionally draining, too. Lee Ann certainly gave her “all” to everyone she met. Then she curled up in the van and slept the entire trip back to Frankfurt!

Lee Ann put into words what we all felt today:

“It’s not every day you wake up knowing ahead of time it’s gonna be one of the greatest days of your life. It was my honor at Landstuhl this morning to shake the hands of American soldiers and marines, look them in the eye and personally thank them for what they’ve done for my family.”

I send out trip reports to so many of my friends and acquaintances that I have met in the military community. One of my buddies – a marine who I met at TQ in Iraq this past April with Charlie Daniels – is on my email journal list. I won’t embarrass him and identify him by name but I want to share a portion of his email:

“…I know I have told you this but you are doing a great deal for all of us who serve. I thank you again. I hope that one day that I can do as much for my fellow men as you have. And please tell Lee Ann Womack and her assistant thank you for all that they do. People that love the freedoms they enjoy, and remember where it has all come from, and what is holding it all together today. Those are the ones that inspire me and especially people like Lee Ann and Courtney that dedicate their time to thank those that are serving. I wish that I could do more. Tell them all that some Cpl in Iraq that they will never meet says thank you for everything. Thanks again for all that you do.”

It is now after 1 am. We will be departing to Italy in just a few hours. Lee Ann’s band departed Nashville early Monday morning and we will be meeting them at the airport on Tuesday morning. On Wednesday evening, they will perform at the Welcome Home Celebration for the troops who were deployed to Afghanistan for the past year.

Judy Seale is President/CEO of Stars for Stripes, a non-profit organization dedicated to providing quality entertainment to internationally deployed U.S. military forces. Bringing together professionals from aviation, entertainment and the military, Stars For Stripes is improving the overseas tour experience for performers, sponsors, donors, and most importantly, for the dedicated men and women protecting our national interests.

Make an online donation to Stars for Stripes