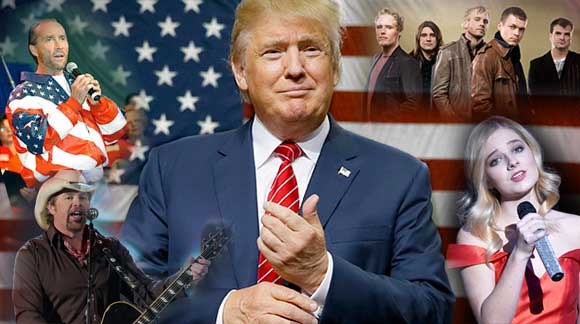 Toby Keith and Lee Greenwood to Perform at Inauguration

Toby Keith and Lee Greenwood are among the artists lending their voices to Donald Trump’s Inauguration. Both will perform at the Lincoln Memorial on January 19 as a part of the Make America Great Again! Welcome Celebration pre-inauguration concert. Other announced performers at the event include Jennifer Holliday and Three Doors Down. “I’m honored to be part of history again and sing for President-elect Donald Trump. This is a time to overcome challenges in our country and band together. My wife Kim and I are looking forward to the inauguration ceremonies,” Greenwood said in a statement. read more at Nashville Gab

“You can’t watch TV without seeing something about the inauguration,” Willie Nelson says with a laugh. Throughout the election cycle, the country singer had voiced support for Hillary Clinton and Bernie Sanders. Now that the election is over, he has revealed in an interview with Rolling Stone that he has written a song titled “Delete and Fast-Forward” for his upcoming album.  When asked about the tune, he speaks some of its lyrics: “Delete and fast-forward, my friend/ The elections are over and nobody wins/ But don’t worry too much, you’ll go crazy again/ Delete and fast forward, my friend.” Read more at Rolling Stone

“We have some plans in motion to record some new music (in 2017), with a top producer; we’re really hoping that that comes together and happens, and it looks like it just might happen,” says Joe Bonsall.   “And a brand-new country album from the Oak Ridge Boys would be really cool; it would be the thing that would get us going in 2017. Even if nothing is a hit, it will get us attention, and, for us, we’ll have new music to sing, and new music always creates new excitement. It would be great for our shows …” read more at The Boot