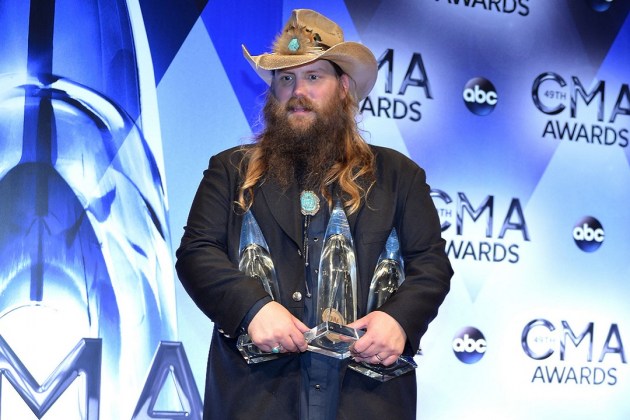 Entertainer of the Year
Luke Bryan

Musician of the Year
Mac McAnally

Chris Stapleton was the big winner during “The 49th Annual CMA Awards” as he went three for three, sweeping each category in which he was nominated.  Stapleton was named Male Vocalist and New Artist of the Year. His LP Traveller was also named Album of the Year.  Stapleton receives a second trophy as a producer for the project, which he co-produced with Dave Cobb.  This marks the first time a New Artist winner also won for Album of the Year, and are Stapleton’s first CMA Awards. “I feel lots of love. It’s a short answer, but it’s a real one,” Stapleton told press gathered backstage.

Luke Bryan brought home a second consecutive win for Entertainer of the Year.
“I put so much pride in giving all I’ve got every night performing, getting off the stage with ice packs on my knees and out of breath,” Bryan said. “This is a night where I can go ‘Gosh, people are paying attention to that.'”

The win marks Urban’s fourth trophy in the category, tying him with Vince Gill, Tim McGraw, and Paisley as top winners. He is also the only artist to win three years in a row.

“Girl Crush” was named Single and Song of the Year, marking Little Big Town’s second victory in the Single category. The track was produced by Jay Joyce and songwriters Hillary Lindsey, Lori McKenna, and Liz Rose are first-time winners for penning the hit. Little Big Town were also named Vocal Group of the Year for the fourth consecutive time.

Miranda Lambert continued her reign as Female Vocalist of the Year as she collected the trophy for the sixth consecutive year. She holds the record for most wins in the category, and is the most awarded female in CMA history.

Mac McAnally likewise extended his winning streak as he was named Musician of the Year for the eighth year in a row.