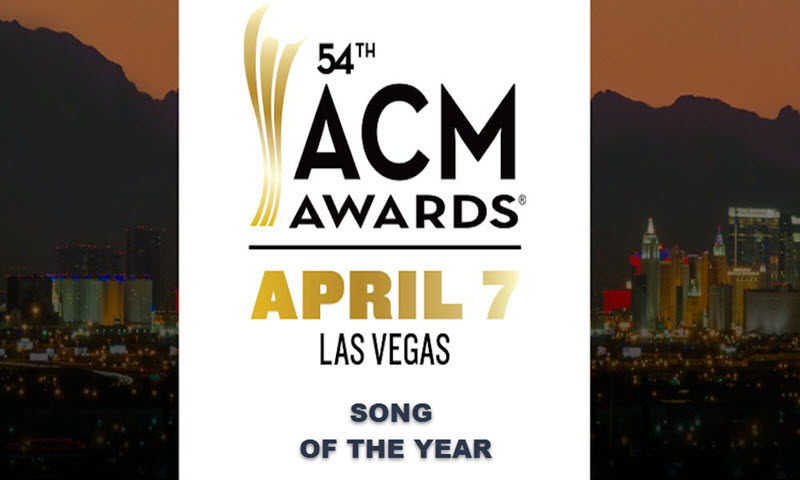 2019 Academy of Country Music Awards nominees for Song of the Year are Break Up In The End – Cole Swindell, Broken Halos – Chris Stapleton, Meant To Be – Bebe Rexha featuring Florida Georgia Line, Space Cowboy – Kacey Musgraves,  Tequila – Dan + Shay, and Yours – Russell Dickerson.  Here’s a look at each of the contenders.  The winner will be announced at the ACM Awards live from Las Vegas on April 7, 2019.

Break Up In the End – Cole Swindell

Cole Swindell has written singles for so many of our favorites, including Luke Bryan, Scotty McCreery, Thomas Rhett, and Craig Campbell, along with releasing three of his own albums and nine singles. Of those 9 singles, 7 have hit the Top 5 of Hot Country Songs. Overall, Cole’s career is off to a great start, especially if he manages to bring home his second win!

Chris Stapleton grew up in Kentucky where his mother worked at the local health department and his father was a coal miner. He’s married to Morgane Stapleton and they share 4 kids together. Singer, song-writer, record producer, and guitarist. Chris Stapleton is a man of many talents and accolades, including being the co-writer of over 170 songs, winning 5 Grammy awards, 7 ACMs, and many more.

Brian Kelley was once the star pitcher on his high school baseball team, while Tyler Hubbard, who grew up in Georgia, was a church worship leader who formed a hip hop group called Ingenious Circuit, in his teenage years. The pair met at Belmont University in 2008 through a worship group and decided to give themselves 2 years to make it as a country duo. And that’s exactly what they did!

Kacey Musgraves has won 6 Grammy awards, 4 CMA awards, and appeared on season 5 Nashville Star where she placed 7th. Along with successfully touring with Harry Styles, she has released 4 albums including her most recent, Golden Hour, which she co-wrote every single song on and premiered at Number 4 on the US Billboard 200. When it comes to girl power, Kacey is at the top of the game.

Dan and Shay met in Nashville, Tennessee, on December 7, 2012, and started writing the day after they met. They are signed to Warner Bros. Records Nashville and have released three albums, Where It All Began, Obsessed, and Dan + Shay. In January 2018, the duo released “Tequila”, the lead single from their self-titled third studio album. It has since become their highest-charting effort on the US Billboard Hot 100, with it reaching the top 40.

Russell Dickerson is a 31 year old Tennessee native who is on his way to the top of the food chain! He’s already had 2 number 1 hits: “Yours” which made TheKnot.com’s Best Wedding Songs of 2016 list, and “Blue Tacoma”, is the perfect summer anthem. Along with the success of these singles, Russell has also toured with Thomas Rhett, Billy Currington, and is currently making the rounds with Lady Antebellum and Darius Rucker.

Check out the full list of 2019 ACM Awards nominees. The ACM Awards will be broadcast live from MGM Grand Garden Arena in Las Vegas on Sunday, April 7 at 8:00 PM ET/PT on CBS.  Who’s your pick to win Song of the Year?