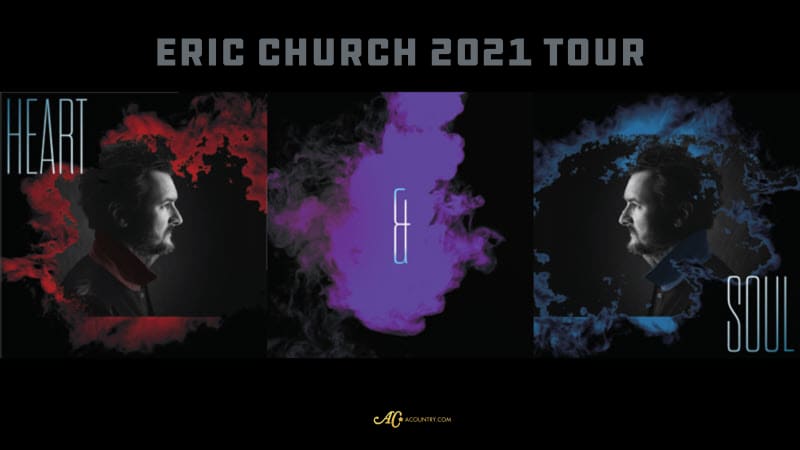 Eric Church teased his 2021 tour with with a video message offering reassurance the live music will return in 2021.

“We are working on a North American tour. We’re waiting for the right timing to officially announce all the details, but I want you to know that a tour is coming, and we are very excited to play new music for our old friends… I cannot wait to see you on the road.”

Today’s news of the upcoming tour is accompanied by the release of “Lynyrd Skynyrd Jones” off his forthcoming three-part project, Heart & Soul. The track is featured on the third album in the collection, Soul, set for release Friday, April 23 following Heart’s release on Friday, April 16 and the release of the Church Choir’s exclusive vinyl-only middle album, &, on Tuesday, April 20.

In addition to releasing new music, Church will also take to the field at Tampa Bay’s Raymond James Stadium on February 7 to perform the National Anthem with R&B star Jazmine Sullivan ahead of Super Bowl LV. The 10-time GRAMMY nominee recently spoke with the Los Angeles Times about the prestigious performance, noting “With what’s going on in America, it feels like an important time for a patriotic moment, an important time for unity. The fact that I’m a Caucasian Country singer and she’s an African American R&B singer — I think the country needs that.”

Following the game, Church will also perform as part of Verizon’s “Big Concert for Small Business” benefit, streaming live at 10 p.m. CT. Fans can visit VerizonBigConcertSmallBiz.com for more information about the event and how to tune in.

.@EricChurch teased his 2021 tour with with a video message offering reassurance the live music will return in 2021. Watch it now on ACountry #nowplaying #ericchurch #concerts #livemusicClick To Tweet

“‘Lynyrd Skynyrd Jones’ was such a tough one for us to get, but it ended up as one of my favorite performances of my career,” reflects Church. “Casey Beathard had written that song and I first played it laying back on my bed for a guitar vocal. I tried to play it the same way a thousand times after that, but there’s a way that song develops that we never could recapture – something about relaxing and laying back; there’s a lope to that song. I started to worry about the soul going away the more we tried, so Jay Joyce said, ‘let’s let Brian Sutton have a shot at it.’ We let him hear it one time and then he was feeling it as we went. There’s some extra pauses and spaces in the back of the recording as he figured it out – I think that’s what makes that song. It’s compelling and that’s a lot to do with Brian and Jay.”

Reigning CMA Entertainer of the Year and current GRAMMY nominee Eric Church has spent the past year releasing new music at a relentless pace; providing a glimpse into the results of a marathon writing session during which he spent nearly a month writing and recording a song per day – including current single “Hell of a View” – while sequestered in a rural North Carolina cabin, and fueling speculation around his highly anticipated new three-part project, Heart & Soul, set for release this April.

Just as unique as Church’s approach to recording and releasing music is his tenacity on the road. During his most recent outing, 2019’s Double Down Tour, Church played back-to-back nights of two unique shows in each market sans opening act, giving every city’s fans six-plus hours of his iconic music. The tour also featured a massive stop at Nissan Stadium in Nashville, where he broke the venue’s concert attendance record with more than 56,000 fans in attendance and became the first artist to sell out the venue with a solo lineup. Church will also take to the field at Tampa Bay’s Raymond James Stadium on Sunday, February 7 to perform the National Anthem with R&B star Jazmine Sullivan ahead of Super Bowl LV.

A seven-time ACM Award winner, four-time CMA Award winner, and 10-time GRAMMY nominee, Church has amassed a passionate fanbase around the globe known as the Church Choir as well as a critically acclaimed catalog of music. His most recent album, Desperate Man, earned a GRAMMY nomination for Best Country Album (his third nod in the category) and produced his most recent No. 1 hit, “Some Of It.” Previous releases include the Platinum-certified Sinners Like Me (“How ’Bout You,” “Guys Like Me”), Carolina (“Smoke a Little Smoke,” “Love Your Love the Most”) and Mr. Misunderstood (“Record Year,” “Round Here Buzz”), the Double-Platinum certified The Outsiders (“Like a Wrecking Ball,” “Talladega”) and the 3x Platinum-certified Chief (“Springsteen,” “Drink In My Hand”), as well as 22 Gold, Platinum and multi-Platinum certified singles.

For the latest information and to learn how to join the Church Choir, visit EricChurch.com