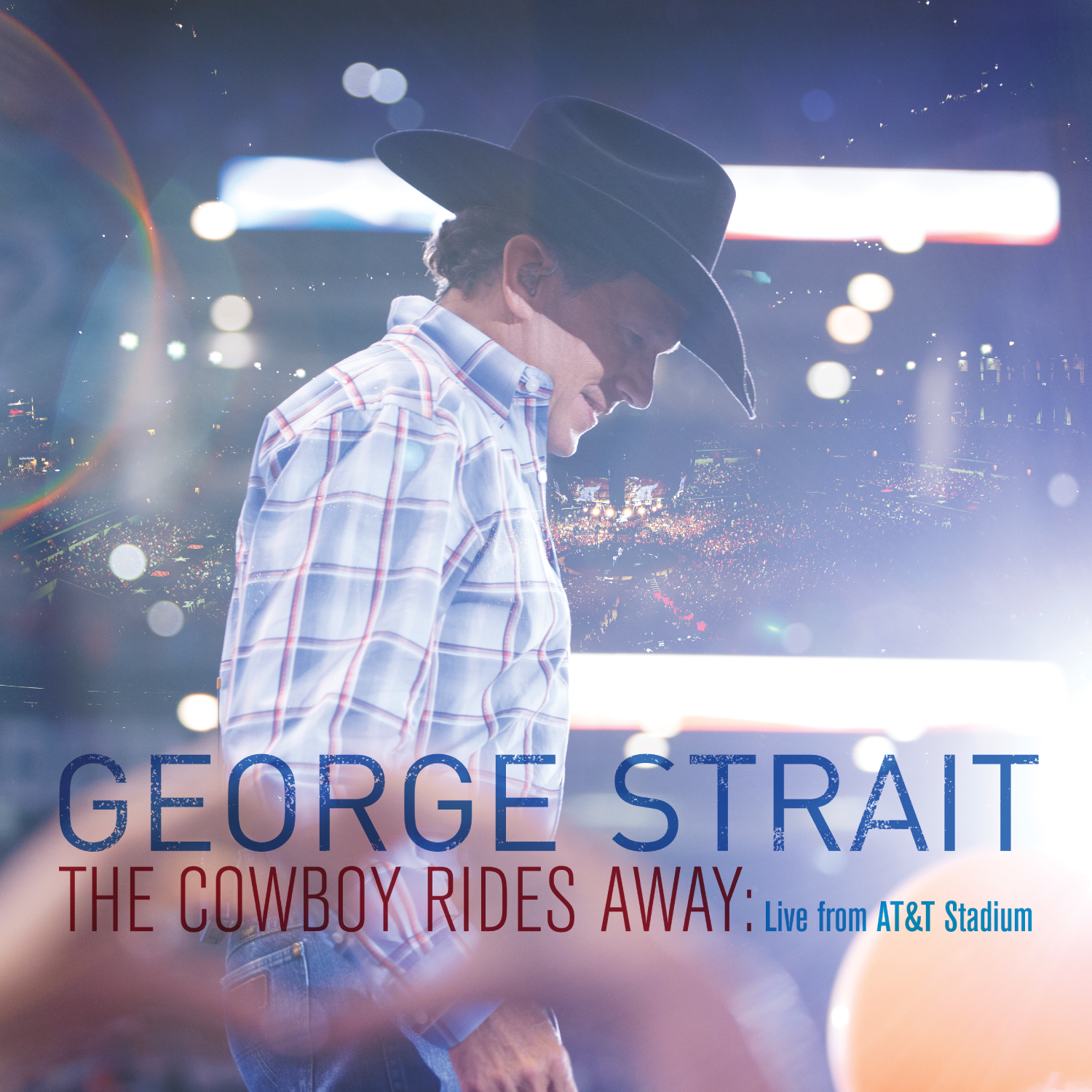 The undisputed “King of Country Music” and reigning ACM and CMA Entertainer of the Year performed for over 1 million fans during his two-year, record-breaking, final U.S. tour. The Cowboy Rides Away: Live From AT&T Stadium epitomizes the energy and shared emotion largely thanks to a Texas-sized crowd of nearly 105,000.  Equally prevalent on the album is Strait’s sentimentality and immense gratitude for his legion of fans.

The Cowboy Rides Away: Live From AT&T Stadium Track Listing:
1.  Check Yes Or No
2.  The Love Bug (with Vince Gill)
3.  Fool Hearted Memory (with Jason Aldean)
4.  Arkansas Dave (with Bubba Strait)
5.  Cowboys Like Us (with Eric Church)
6.  That’s What Breaking Hearts Do
7.  Marina Del Rey
8.  Here For A Good Time (with Sheryl Crow)
9.  I Can Still Make Cheyenne
10. Jackson (with Martina McBride)
11. A Showman’s Life (with Faith Hill)
12. Murder On Music Row (with Alan Jackson)
13. The Chair
14. Give It All We Got Tonight
15. Run (with Miranda Lambert)
16. I’ll Always Remember You
17. Ocean Front Property (with Kenny Chesney)
18. Troubadour
19. All My Ex’s Live In Texas (with Jason Aldean, Ray Benson, Kenny Chesney, Eric Church, Sheryl Crow,
Vince Gill, Faith Hill, Alan Jackson, Miranda Lambert, Martina McBride)
20. The Cowboy Rides Away

George Strait is the undeniable “King of Country Music.”  His music career spans more than 30 years; includes 60 No. 1 singles, more than any other artist in any genre; and boasts 33 platinum or multi-platinum-selling albums, more than any country artist and third across all genres behind only The Beatles and Elvis Presley.  Strait is the only act in history to have a Top 10 hit every single year for over three decades.  Strait has sold more than 68.5 million albums and has earned more than 60 major entertainment industry awards including his most recent Entertainer of the Year sweep at both the Country Music Association Awards (Nov. 2013) and the Academy of Country Music Awards (Apr. 2014).

Strait, whose name has become synonymous with “real country” since his 1981 debut, was inducted into the Country Music Hall of Fame in 2006.  He has since released four more albums, including the GRAMMY Award-winning Troubadour.  In 2013, Strait set out on The Cowboy Rides Away Tour, selling over 1,000,000 tickets to the record-breaking, two-year, cross-country final concert tour. Strait shattered the North American indoor concert attendance record by drawing 104,793 concert-goers to his June 7, 2014 tour finale at AT&T Stadium in Dallas, Texas.
Strait continues to record new music for longtime label home, MCA Records Nashville.