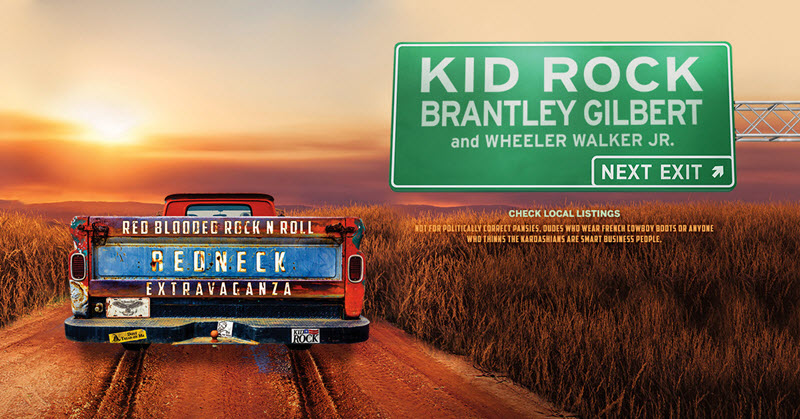 Kid Rock’s Red Blooded Rock N Roll Redneck Extravaganza Tour, with special guests Brantley Gilbert and Wheeler Walker Jr., kicks off August 3 in Banger, ME.    On the heels of wrapping his American Rock ‘N Roll Tour, which Taste of Country lauded “one of Kid Rock’s best tours to date and perhaps one of the best live shows in music today,” the showman will continue to deliver his high-energy, one-of-a-kind live show experience to fans coast-to-coast. The tour will showcase songs from Kid Rock’s blockbuster new album Sweet Southern Sugar. which has spent 13 weeks inside the Top 10 of the Country Album Sales Chart.

Tickets and VIP packages for the tour will go on sale to the general public beginning Friday, April 13 at 10am local time at www.LiveNation.com. Fan Club members will be able to purchase tickets starting Tuesday, April 10 at 10 am local time.

Kid Rock will join the WWE Hall of Fame’s Celebrity Wing tonight (April 6) as a member of the Class of 2018.

Kid Rock burst onto the music scene in 1998 with his Devil Without a Cause album and hasn’t looked back. From hit singles like “Bawitdaba” and “Cowboy” to “Picture” and “All Summer Long,” the recording artist has blazed his own trail in the music world, having sold over 26 million albums to date. Kid Rock holds the Michigan record for most tickets sold with 150,000 for a run of ten consecutive sold-out shows, and recently set the Little Caesars Arena attendance record in his hometown of Detroit with 86,893 attendees in six sold-out shows. Kid Rock remains at the center of media attention in regards to his musical and personal ambitions, leaving his mark in a multitude of genres.

Brantley Gilbert brings a heavy load to his kind of country. With 6 #1s – “One Hell Of An Amen,” “Country Must Be Country Wide,” “You Don’t Know Her Like I Do,” “Bottoms Up,” “My Kind of Party” and CMA Song of the Year nominee “Dirt Road Anthem” – and the American Music Award for Favorite Country Album for Just As I Am, the Georgia born vocalist hits hard, delivering country that rocks, but also captures the dignity and impact of life lived beyond the city. The Devil Don’t Sleep, his latest, continues blending life-affirming ballads with unrelenting throwdowns, reflect RollingStone.com’s take, calling him, “a brooding, hip-hop influenced rocker with a healthy dose of Gilbert’s trademark Southern flourishes, (he) plays the defiant outlaw role.”

When Wheeler Walker Jr. burst onto the scene in 2016 with his debut album Redneck Shit, most of the country music industry thought of him as a joke. They stopped laughing when the album debuted at #9 on the Billboard Country Albums chart. Produced by Grammy winner Dave Cobb (Chris Stapleton, Jason Isbell), Wheeler has been taking country music back to its roots. His second album, Ol Wheeler, debuted Top 5 on the Billboard Country Charts. Wheeler has been named checked by everyone from Snoop Dogg to Chris Stapleton. His unique take on country music has certified him a bonafide phenomenon.