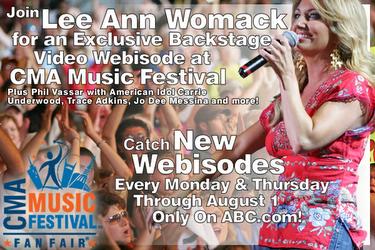 “These first-ever webisodes are a great opportunity for Country Music fans to get a first-person account of the Festival as well as an idea of what’s coming from the ABC special,î said Daphne Larkin, CMA Director of New Media and Technology Services.

The video vignettes are featured on the homepage of ABC.com. Archives of the webisodes will be available in the Featured Video section of ABC.com and after Aug. 2 on CMAfest.com.

Part 2 of the webisode debuts on July 14 featuring Lee Ann Womack plus Alan Jackson, Sara Evans, Josh Gracin, Blake Shelton, Travis Tritt, Rascal Flatts, Wynonna, Kenny Rogers, Trisha Yearwood and more. Don’t miss Lee Ann Womack on tour with Toby Keith and Shooter Jennings on the Big Throwdown II Tour. Lee Ann will be performing some of her greatest hits and songs from her critically acclaimed CD, Thereís More Where That Came From, including the hit, ìI May Hate Myself In The Morning.î

A new webisode will be released every Monday and Thursday through Aug. 1. ìCMA Music Festival: Country Musicís Biggest Partyî a two-hour network primetime special on ABC is scheduled to air Tuesday, Aug. 2 (8:00-11:00 PM/ET).

To order tickets for the 2006 CMA Music Festival call 1-800-CMA-FEST (262-3378); visit www.CMAfest.com to download an order form to fax or mail; visit www.ticketmaster.com to buy online or charge-by-phone at (615) 255-9600. Prices do not include applicable handling fees. Ticket prices are subject to change without notice. All sales are final and non-refundable.