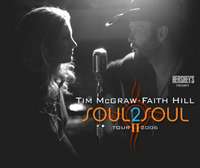 Tim McGraw and Faith Hill’s Soul2Soul II Tour 2006 is on pace to be the hottest concert event of the year. The tour has already sold more than 350,000 tickets to become the fastest selling concert tour of 2006.

Kicking off April 21 in Columbus, Ohio, Tim McGraw and Faith Hill’s Soul2Soul II Tour has taken minutes to sell-out performances in Denver, Hershey, Greenville, Dallas, New York City, Pittsburgh, as well as multiple night appearances in Boston, Chicago and Columbus. Additional shows, to accommodate the frenzied sales pace, have been added in Seattle, Boston, Columbus, New York City and Chicago and more additions are expected to be announced in the coming weeks. “When two artists like Tim and Faith decide to tour, it’s not just a tour, it’s a concert event that is not to be missed,” said Larry Vallon, Senior VP, AEG Live.

“Only Tim and Faith can top Tim and Faith,” said Brian O’Connell, President, LiveNation Country Touring. “Faster sales than the first Soul2Soul Tour, an entirely new production and nearly 35 No 1 songs between them – the way their fans have gobbled up tickets should really come as no surprise.”

Fans can expect a great seat anywhere in the house with “Soul2Soul II” Tour’s unique in-the-round set design that will put fans closer than ever to the concert action.