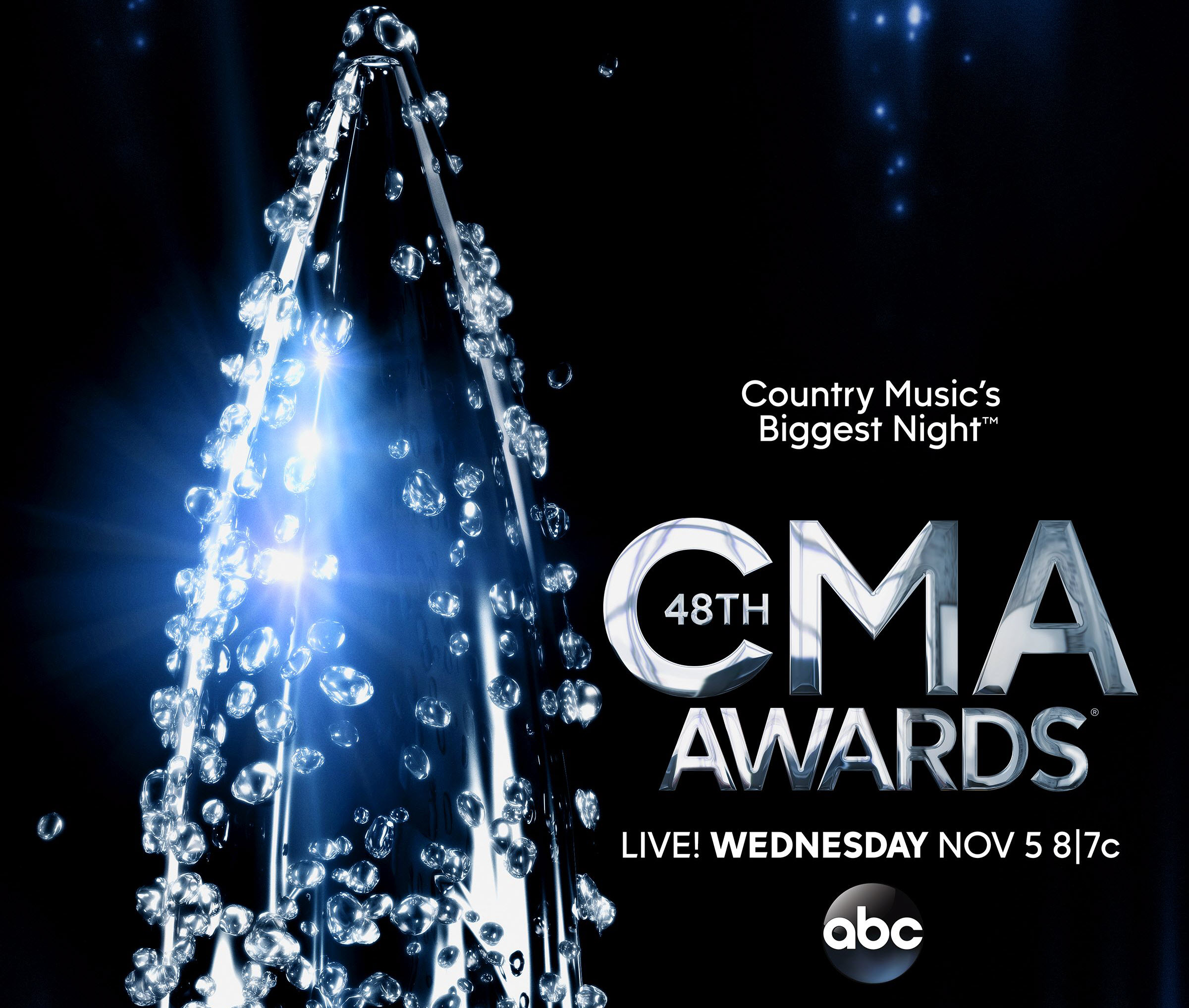 Luke Bryan, Miranda Lambert, Blake Shelton, George Strait, and Keith Urban are nominated for Entertainer of the Year.  The 48th Annual CMA Awards will be hosted for the seventh time by Brad Paisley and Carrie Underwoodand broadcast live from the Bridgestone Arena in Nashville,Wednesday, Nov. 5 (8:00-11:00 PM/ET) on the ABC.

“This is a great slate of nominees with established superstars, industry icons, and breakthrough acts all represented,” said CMA Chief Executive Officer Sarah Trahern. “The 2014 CMA Awards are destined to be the best yet.”

For the ninth year, the announcement of the final nominees in five of the 12 CMA Awards categories was made live on ABC News’ “Good Morning America” withLittle Big Town and Darius Rucker delivering the news from the heart of New York City’s Times Square. They then went to the Best Buy Theater to announce the finalists in the remaining seven categories during a press conference that was made available across the world via live stream at CMAawards.com.

“It is great for the industry to be able to announce our nominees for Country Music’s top honors on the world’s biggest stage and still be able to share it with the industry in Nashville and fans around the world,” added Trahern.

Lambert’s nominations include Entertainer (she received her first nomination in this category in 2010); Female Vocalist; Album for Platinum, which was produced byFrank Liddell, Chuck Ainlay, and Glenn Worf; two nominations for Musical Event for “Somethin’ Bad” with  Underwood and “We Were Us” with Urban; and two nominations for Music Video of the Year for “Automatic” and “Somethin’ Bad” with Underwood, which were both directed by Trey Fanjoy. In addition, “Automatic” picked up nominations for Single (produced by Liddell, Ainlay, and Worf) and Song of the Year for songwriters Nicolle Galyon, Natalie Hemby, and Lambert. This brings Lambert’s career CMA Awards nominations to 34. Reba holds the record for female artist nominations with 49, followed by Parton (44), and Loretta Lynn (39), which places Lambert fourth on the list.

Urban also collected four nominations including Entertainer of the Year, which he won in 2005; Male Vocalist, which he has won three times (2004-2006); Album for Fuse, which was produced by Benny Blanco, Nathan Chapman, Copperman, Zach Crowell, Mike Elizondo, Dann Huff, Joyce, Stargate, Butch Walker, and Urban (Urban only receives one nomination for the category, but can receive a second trophy as producer); and Musical Event with Lambert for “We Were Us.”

Bryan, who received his first Entertainer of the Year nomination in 2013, is back in the top category in 2014. He also collected nominations for Male Vocalist and Album of the Year for Crash My Party, which was produced byJeff Stevens.

Musgraves, who won New Artist of the Year in 2013, came back with three nominations this year including Female Vocalist; Song for “Follow Your Arrow,” which she wrote with Brandy Clark and Shane McAnally; and Music Video of the Year for “Follow Your Arrow,” which Musgraves directed with Honey (Musgraves only receives one nomination in the category, but can receive a second trophy as video director).

Shelton, who is the reigning CMA Male Vocalist of the Year, was nominated three times including Entertainer; Male Vocalist; and Single of the Year for “Mine Would Be You,” which was produced by Scott Hendricks.

CMA Awards co-host Underwood will be busy during the three-hour broadcast on ABC. She has three nominations including Female Vocalist; and Music Video and Musical Event of the Year with Lambert for “Somethin’ Bad.”

Tim McGraw and Faith Hill collected two nominations each for “Meanwhile Back At Mama’s,” which was nominated for Musical Event and Single of the Year, and was produced by Byron Gallimore and McGraw (McGraw only receives one nomination in the category, but can receive a second trophy as producer).

Strait, who was inducted into the Country Music Hall of Fame in 2006, joins several other members of this prestigious group on the list of nominees in 2014.

Gill, who hosted the CMA Awards a record 12 times and was inducted into the Hall of Fame in 2007, was nominated for Musical Event of the Year with Paul Franklin for Bakersfield.

Rogers, who received the Willie Nelson Lifetime Achievement Award and was inducted into the Hall in 2013, was nominated for his duet with Parton (1999 Hall of Fame inductee) for “You Can’t Make Old Friends.” Parton won her last CMA Award in this category in 2006 for “When I Get Where I’m Going” with Paisley. Rogers and Parton received their last nomination together in 1986 for Vocal Duo of the Year.

Lee Brice’s hit “I Drive Your Truck” won Song of the Year in 2013 for the songwriters. This year, Brice is collecting a songwriter nomination of his own for “I Don’t Dance” with songwriters Rob Hatch and Dallas Davidson.

The Female Vocalist of the Year category is an interesting one to watch in 2014 with several records on the line. In addition to Lambert, Musgraves, and Underwood, Martina McBride and Taylor Swift are nominated. Three women have won this Award four times including Lambert (2010-2013), McBride (1999, 2002-2004), and Reba (1984-1987). With a win, Lambert or McBride could set a new record; if Underwood wins, there would be a four-way tie in the category for most wins to date. Swift last won the Female Vocalist trophy in 2009.

Two-time CMA Vocal Group of the Year Little Big Town (2012, 2013) has been nominated in the category every year since 2006 and this year they are joined by Eli Young Band; Lady Antebellum, who have won three times (2009-2011); The Band Perry; and Zac Brown Band.

Lady Antebellum has a second nomination for Music Video of the Year for “Bartender” directed by Shane Drake.

Two first-time nominees enter the category for the Vocal Duo of the Year – Dan + Shay and The Swon Brothers. They join reigning CMA Vocal Duo winners Florida Georgia Line; Love and Theft, who have been nominated three times in the category; and Thompson Square, who won the trophy in 2012.

Three acts debut in the New Artist of the Year category in 2014 including Clark (who was also nominated for Song of the Year), Thomas Rhett, and Cole Swindell. Returning to the category a second time are Brett Eldredge andKip Moore. Artists can only be included in this category twice.

Winners of “The 48th Annual CMA Awards” will be determined in a final round of voting by eligible voting members of the Country Music Association. CMA Awards balloting is officiated by the international accounting firm of Deloitte & Touche LLP. The third and final ballot will be emailed to CMA members Thursday, Oct. 9. Voting for the CMA Awards final ballot ends Monday, Oct. 27 (5:00 PM/CT).

Tickets for “The 48th Annual CMA Awards” go on sale to the public Saturday, Sept. 6 (10:00 AM/CT). Tickets can be purchased at ticketmaster.com; by calling (800) 745-3000; or in person at the Bridgestone Arena Box Office, located at 501 Broadway (corner of Fifth Avenue and Broadway, Nashville). CMA Awards information is available at CMAawards.com. Or follow the conversation on Twitter at #CMAawards.

“Drunk On A Plane”

“Give Me Back My Hometown”

“Meanwhile Back At Mama’s”

“Mine Would Be You”

“Give Me Back My Hometown”

MUSICAL EVENT OF THE YEAR

(Award goes to each artist)

Vince Gill and Paul Franklin
“Meanwhile Back At Mama’s”

MUSIC VIDEO OF THE YEAR

“Drunk On A Plane”

Directed by Kacey Musgraves and Honey