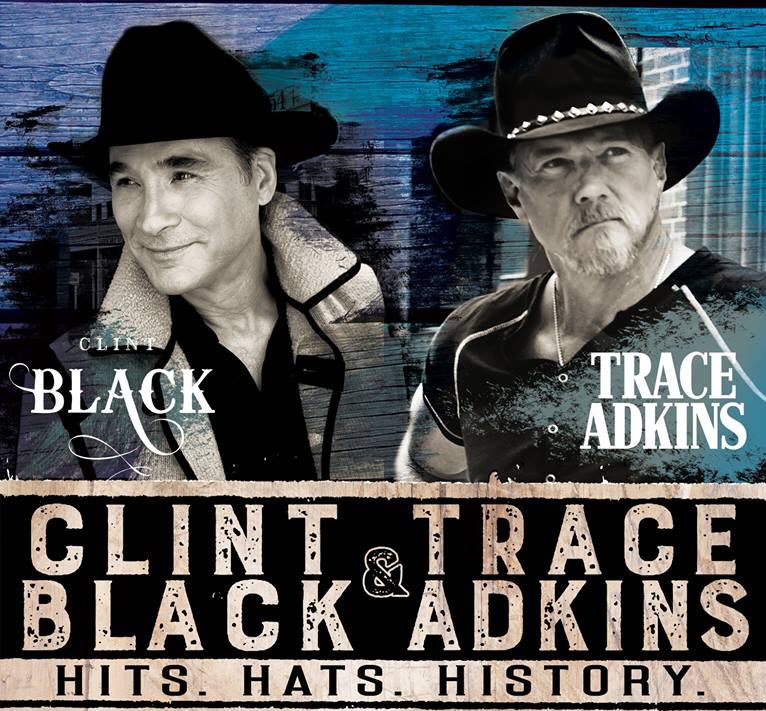 Clint Black and Trace Adkins will make a triumphant return to the stage together as part of The Hits. Hats. History. Tour.   Pre-sale tickets go on sale March 5, with all remaining tickets going on sale March 8 at 10 a.m. (local time). The Hits. Hats. History. Tour kicks off May 2 in Charlotte, North Carolina and travels to nine different cities through August 9, with additional dates to be announced. The tour will also feature a series of special guests including Terri Clark, John Berry and Craig Campbell.

“It’s been a few years since Clint and I shared the stage,” explains Trace Adkins, a three-time GRAMMY nominated BBR recording artist. “Since then, we have both been fortunate to have added a few more hits, and hats, to our collection. Looking forward to this!”

“Trace and I toured together back in the ’90’s and I’m really looking forward to sharing the stage with him again!” said Black, a GRAMMY award winner and one of the most successful singer/songwriters of the modern era. “He’s a lot of fun and a real pro.”

Clint Black and Trace Adkins will hit the road together on The Hits Hats History Tour, kicking off May 2 in Charlotte, NC See the tour dates on ACountry Click To Tweet

In addition to The Hits. Hats. History. Tour, Clnt Black will launch his Still Killin’ Time 30th Anniversary Tour in March to celebrate the 30th Anniversary of his triple Platinum, seminal album, Killin’ Time. To this day, it is recognized as one of country music’s most authoritative recordings, it’s influence still heard on many of the recordings that have followed.

It is one of the most storied careers in modern music. Clint Black surged to superstardom as part of the fabled Class of ’89, reaching #1 with five consecutive singles from his triple-platinum debut, Killin’ Time. He followed that with the triple-platinum Put Yourself in My Shoes, and then a string of platinum and gold albums throughout the ’90s. Perhaps most impressively, Clint wrote or co-wrote every one of his more than three dozen chart hits, including “A Better Man,” “Where Are You Now,” “When My Ship Comes In,” “A Good Run of Bad Luck,” “Summer’s Comin’,” “Like the Rain” and “Nothin’ But the Taillights,” part of a catalog that produced 22 #1 singles and made him one of the most successful singer/songwriters of the modern era.  Along the way, Clint has sold over 20 million records, earned more than a dozen gold and platinum awards in the U.S. and Canada, landed nearly two dozen major awards and nominations, won a GRAMMY Award, and earned a star on the Hollywood Walk of Fame.

Trace Adkins is also on the road this summer as part of his current Don’t Stop Tour 2019. Currently, the “You’re Gonna Miss This” hit-maker is out with his “Hillbilly Bone” buddy Blake Shelton as part of his Friends & Heroes 2019 tour, which concludes March 23 in New York. And while the Grand Ole Opry member certainly has much on his plate as of late, he is still set to lend his voice to the character of Robert in the forthcoming “Dally & Spanky,” due out later in 2019.

Towering baritone Trace Adkins has sold more than 11 million albums and charted more than 20 singles in his 25 years in Nashville, a remarkable run for one of country music’s most easily identifiable stars. With over one billion spins on Pandora (10 million per month), one million followers on Spotify and nearly 200 million plays on YouTube, the Louisiana native is back in the studio after releasing his 12th studio album, Something’s Going On, on BBR Music Group/Wheelhouse Records in 2017. A three-time GRAMMY Award nominee, Adkins has won three Academy of Country Music Awards, including the 2009 Single of the Year Award for “You’re Gonna Miss This” and Vocal Event of the Year with Blake Shelton for “Hillbilly Bone” in 2010. The Grand Ole Opry member is also an author and spokesman for the Wounded Warrior Project and The American Red Cross, for whom he raised more than $1.5 million dollars as winner of NBC’s All-Star Celebrity Apprentice. In recent years, Adkins has performed for our service members across 12 USO Tours. In his 2007 autobiography, A Personal Stand: Observations and Opinions from a Freethinking Roughneck, Adkins recounted his rise to fame, brushes with death, and battles with personal demons. Adkins has also acted in multiple films and television shows, playing a tough-as-nails biker in “The Lincoln Lawyer” (starring Matthew McConaughey), a desperate father in “Deepwater Horizon” (starring Mark Wahlberg) and a wise oracle of a tattoo artist in the family friendly film “Moms’ Night Out” (starring Patricia Heaton, Sean Astin, Sarah Drew). His most recent role was that of MercyMe’s real-life manager, Brickell, in the box office smash “I Can Only Imagine.” The film was the third biggest selling movie on its opening weekend in America.