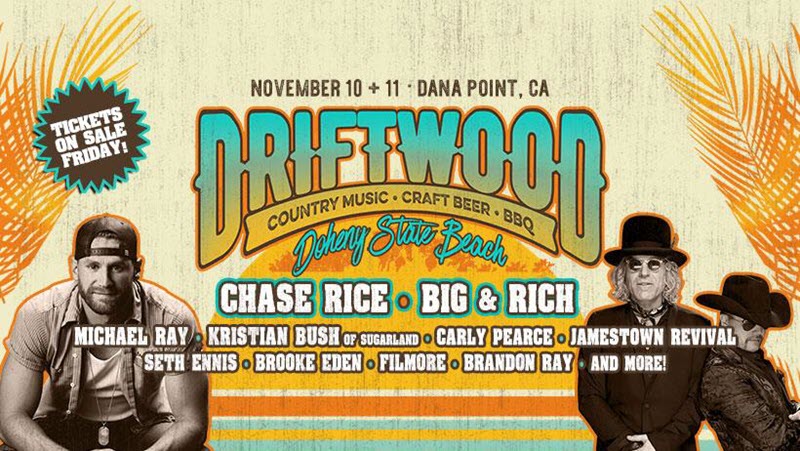 Driftwood Country Music, Craft Beer & BBQ Festival returns to Doheny State Beach in Dana Point, CA November 10-11, 2018 for its 3rd annual Veterans Day Weekend celebration. Presented by Go Country 105, this all ages event will feature music from some of today’s top country music acts including Chase Rice, Big & Rich, Michael Ray, Kristian Bush (of Sugarland), Carly Pearce, and more, plus tastings from a selection of over 200 craft beers, and top-notch BBQ from some of the region’s best restaurants and food trucks.

Chase Rice says, “There’s nothing like a fall night out at a music festival. Last time we played the Driftwood festival out in Dana Point, the fans were incredible, and there to take it all in –not just the hits, they knew the album cuts. When we make music it’s with moments like that in mind.  We can’t wait to see y’all again.”

A limited number of Single Day and Weekend VIP packages will also be available for purchase, including an “eat and greet” Backyard BBQ With Chase Rice. Driftwood VIP is presented by Head Down Eyes Up, Chase Rice’s apparel brand and personal motto: “A way of life where you succeed not by looking at an end result, but by fighting every step of the way.”

For more on Driftwood, visit: DriftwoodFest.com