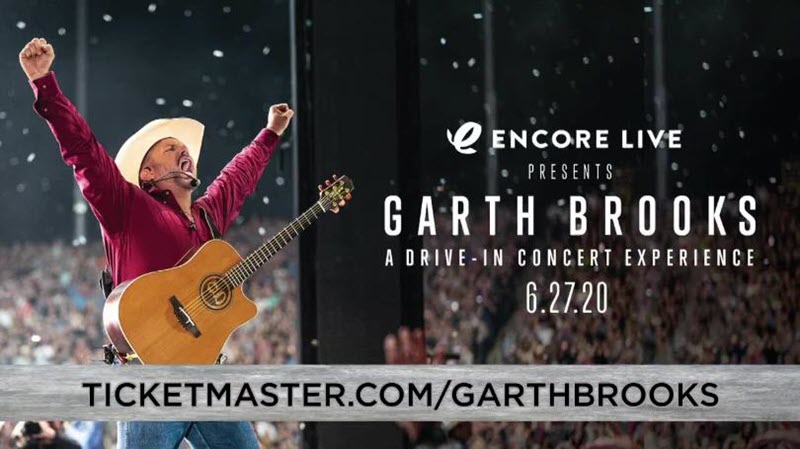 “I am so excited to get to play again. I have missed it so much and want to get back to it,” said Brooks. “This drive-in concert allows us all to get back to playing live music without the uncertainty of what would be the result to us as a community. This is old school, new school, and perfect for the time we are in.”

“This one guy came to me and said, ‘Hey, look, we can put 300 drive-in theaters together if you will create a concert solely for the drive-ins. We can have families jump in the car, get them out on Saturday night,” Garth said on Good Morning America.

“They’re going to run it just like a regular concert, but this is going to be all over North America, one night only,” he continued. “We are excited because this is a reason to get out of the house, but at the same time you get to follow all the COVID rules from every individual state and you get to have fun and stay within the guidelines of social distancing … we’re calling it ‘social distancing partying.'”

The event will be produced by Encore Live and will be the largest ever one-night show to play at outdoor theaters across the United States and Canada.

“Families need safe entertainment options that they can enjoy together this summer,” said Encore Live Founder and CEO Walter Kinzie. “We’re excited to partner with Garth, who’s already done so much to help the entertainment industry during these tough times, to provide a truly unique and incredible concert that will do a whole lot of good for local businesses and communities.”

.@GarthBrooks drive-in concert will be aired June 27 at over 300 drive-in theaters across North America. After Garth's super cool #DiveBar Tour, Garth is bringing the music to a Drive-In near you. #garth #driveinClick To Tweet

Encore Live has developed a reputation as one of the most innovative event production companies in the country. In the absence of traditional live events, the company reached exclusive agreements with drive-in theater owners across North America to safely bring fans this first-of-its-kind concert on a massive scale.

For ONE NIGHT ONLY a special Garth Brooks concert JUST FOR DRIVE-IN THEATERS across America! Tickets ON SALE 6/19 at 12pm ET! #GarthDriveIn -Team Garth pic.twitter.com/Qw1U7btiyd

The show will adhere to guidelines recommended by the Centers for Disease Control and Prevention (CDC) as well as all state and local health mandates. Encore Live has partnered with leading health experts to establish procedures for staff and fans. These will include maintaining at least six feet of space between vehicles, the use of personal protective equipment by staff, leveraging contactless payment and ticketing systems, and limiting capacity in restrooms. Guidelines around concessions will also be enforced to abide by individual state regulations.