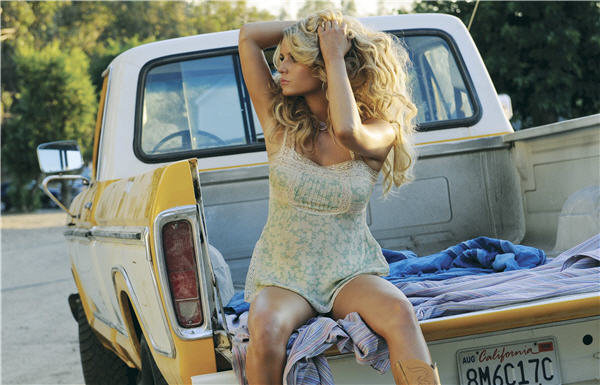 Jessica Simpson has taken the music, fashion, and beauty and entertainment industries by storm. A talented artist with universal appeal, she has become an international star and shows no signs of slowing down.

Born and raised in Dallas, Texas, Jessica began her performing career by sharing the stage with famous gospel acts such as Kirk Franklin, God’s Property, and Ce Ce Winans. With her unmistakable voice and unique pop sound, Jessica caught the eye of Columbia Records executive Tommy Mattola, and after joining a tour in support of the boy-band 98 Degrees, she quickly burst onto the music scene in 1999 with her debut release Sweet Kisses. Her RIAA-certified double platinum debut featured Jessica’s massive breakthrough hit, “I Wanna Love You Forever,” which hit #3 on the Billboard Hot 100 chart.

But it was the success of her 4 times platinum album, In This Skin, which marked Jessica’s debut as a songwriter and further refined her ever-evolving voice as an artist. “Sweetest Sin,” the album’s first single to hit the Top 40, is a marked change from the giddy teen pop that launched her career.

Having made her mark in the music industry, it wasn’t long before Hollywood was knocking on her door. In addition to a recurring role on That 70’s Show, Jessica’s MTV reality show Newlyweds: Nick & Jessica launched in 2003, and was a huge hit, making her a household name. In 2005, Jessica made her film debut as Daisy Duke in The Dukes of Hazzard, and released a cover of Nancy Sinatra’s “These Boots Were Made For Walkin’” for the movie’s soundtrack which topped the Billboard Hot Digital Tracks charts and was certified platinum. Jessica’s just completed shooting her next film project, Employee of the Month for Lions Gate Films.

Jessica just finished recording her fifth solo album, “ A Public Affair” to be released August 29th on Epic Records. Simpson boasts songwriting credits on 10 out of the 13 slated tracks produced by the most sought-after producers in the business: Lester Mendez, Jimmy Jam &Terry Lewis, Cory Rooney, Scott Storch and Stargate. The album is a true reflection of her growth both personally and musically, showcasing her diverse range of artistic influences. There are up-tempo dance tracks, ballads, and a beautiful cover of “Let Him Fly” originally recorded by her personal favorite, Patty Griffith.

An enthusiastic philanthropist, Jessica serves as Operation Smile’s International Youth Ambassador. She most recently joined the Operation Smile international medical mission in Nakuru, Kenya where she assisted the volunteer team with the medical evaluations of the more than 280 children who visited the remote region with the hopes of receiving life-changing corrective surgery for their facial deformities.

Jessica has been praised by fans and recognized by critics with three Teen Choice Awards for Breakout Artist, Love Song of the Year and Red Carpet Fashion Icon, and nominations for two American Music Awards including Favorite Pop/Rock Female Artist and Favorite Pop/Rock Album and two MTV Video Music Awards for Best Female Video and Best Pop Video. She has also graced the covers of many high-profile magazines, such as Rolling Stone, Cosmopolitan, GQ, Marie Claire and Elle.

A Night For Austin

Brad Paisley : Live From The Drive-In