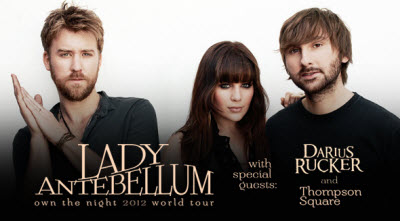 Hey Fresno – get your boots on and get ready for great country music with Lady Antebellum's Own the Night 2012 world tour concert on March 28, 2012 at Save Mart Center.

Lady Antebellum's second album, Need You Now, has sold over 5 million copies worldwide, spawning three multi-week No. 1 hits (“Need You Now,” “American Honey” and “Our Kind of Love”), and scored 5 Grammy Awards. It has also received over a dozen other award show trophies. ‘Need You Now’ introduced the world, outside North America, to Lady Antebellum. The single was a huge airplay hit around the globe, reaching the No. 1 spot in numerous markets and achieving Top 5 Airplay in 30 countries world-wide.

Directions To Save Mart Center

From the North (Sacramento): South on 99 to 180 East to 168 North. Take Shaw Ave exit. Turn Left. Turn Right on Chestnut for Parking.

From the South: North on 99, take 41 North, then East to 168 North. Take Shaw Ave exit. Turn Right on Chestnut for Parking

Save Mart Center offers over 4,000 parking spaces available  in North lot off of Matoian Ave and East lot off Chestnut.