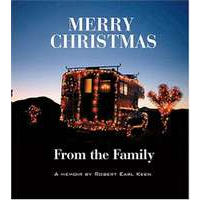 Merry Christmas From The Family is the companion book for Robert Earl Keen’s popular Christmas tune of the same name. Using authentic Keen family photos, recipes, and craft instructions, it illustrates all the verses of the song, which you can sing along with on the accompanying CD. Whether you”re one of Robert Earl’s legion of fans, or you’ve just had enough of Perry, Bing, and the other crooners, Merry Christmas from the Family is what you need to keep the holidays in hilariously skewed perspective.

As Keen tells it in this wry send-up of all those impossibly sweet, “not like our family” Christmas carols, Mom and Dad got drunk at the Christmas party, sister and brother brought their dubious significant others, the relatives’ motor home blew out the Christmas lights, and a convenience store supplied all the goodies.

First available on Keen’s Gringo Honeymoon CD released in 1994, “Merry Christmas From The Family” is also featured on Montgomery Gentry’s recently released greatest hits collection, Something To Be Proud Of: The Best of 1999-2005.

“Coming out of the box, Eddie & I were bad-asses and hell-raisers and definitely not the “Rudolph the Red-Nosed Reindeer” type,” Gentry says. “But this song was one of those fun partying songs that talked about the bad in-laws and the aunt that’s a chain-smoker. It seemed to fit the Montgomery Gentry image and really, fits a lot of American families.”

Montgomery adds, “I love this song because it represents everybody’s family. I don’t know any family that isn’t just a little bit messed up.”

Merry Christmas From The Family lyrics

From his second wife Mary Nell
Of course he brought his new wife Kaye
Who talks all about AA
Chain smokin’ while the stereo plays
Noel, Noel, The first Noel

Carve the turkey turn the ball game on
Mix Margaritas when the eggnog’s gone
Send somebody to the Quik-Pak store
We need some ice and an extension cord
A can of bean dip and some Diet Rite
A box of pampers , some Marlboro Lights
Hallelujah everybody say cheese
Merry Christmas from the family

Carve the turkey turn the ballgame on
Mix Bloody Marys cause we all want one
Send somebody to the Stop ‘n Go
We need some celery and a can of fake snow
A bag of lemons and some Diet Sprite
A box of midol, some Salem Lights
Hallelujah everybody say cheese
Merry Christmas from the family
Feliz Navidad

Buy the Merry Christmas From The Family book now from Amazon