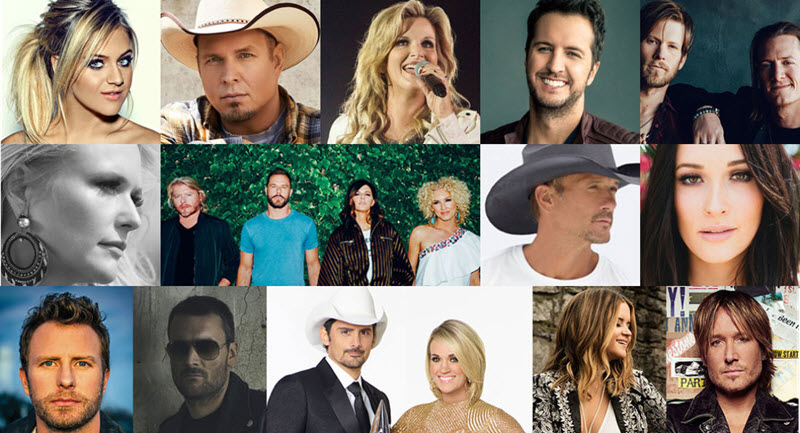 The 50th Annual CMA Awards will be hosted by Brad Paisley and Carrie Underwood and broadcast live from the Bridgestone Arena in Nashville, Wednesday, Nov. 2 (8:00-11:00 PM/ET) on the ABC Television Network.

“The CMA Awards will include moments that pay homage to our past 50 years, but it is also a celebration of the past 12 months and the artists and music that have resonated with the industry and our fans,” said Sarah Trahern , CMA Chief Executive Officer. “The lineup of performers is outstanding and represents the legacy of County Music as well as our future.”

Kelsea Ballerini, who received her first CMA Awards nominations in 2015, received her second-time nods for both Female Vocalist and New Artist of the Year in 2016.

A member of the Country Music Hall of Fame, Garth Brooks returns to the Entertainer of the Year category after being nominated in 2015 (he has won four times). He has a career total of 11 CMA trophies and 32 nominations. He will be performing a medley of beloved Country classics with Yearwood.

Luke Bryan,  the reigning Entertainer of the Year, is nominated again in 2016 (he received his first nomination in the category in 2013). He is also nominated for Musical Event of the Year for “Home Alone Tonight,” featuring Karen Fairchild of Little Big Town.

Florida Georgia Line has received seven CMA Awards nominations and four wins, including three consecutive trophies for Vocal Duo (2013-2015) and one for Single of the Year (“Cruise”). They are nominated for Vocal Duo in 2016.

Miranda Lambert, the most awarded female in CMA Awards history with 12 wins and 39 nominations, received a nomination for Female Vocalist of the Year (she is a six-time, consecutive winner in the category).

Tim McGraw, a 38-time CMA Awards nominee, received three nominations this year including Male Vocalist; and Single and Music Video of the Year for “Humble and Kind.” McGraw only receives one nomination for Single of the Year, but can receive an additional trophy as producer.

Dierks Bentley, a 20-time nominee and two-time winner including the Horizon Award in 2005 (now New Artist of the Year) and Music Video of the Year in 2014 for “Drunk on a Plane,” will vie for Male Vocalist; Album (Black); Music Video for “Somewhere On A Beach”; and Musical Event of the Year for “Different for Girls” with Elle King (her first CMA Awards nomination).

Eric Church’s nominations include Male Vocalist; Album (Mr. Misunderstood); and Single, Song, and Music Video of the Year for “Record Year.” Church is a top nominee for the second year in a row matching the five nominations he received in 2015. He now has a total of 22 nominations since his first in 2011 for New Artist of the Year.

Maren Morris didn’t just receive her first nominations in 2016, she received five including Female Vocalist; Album (Hero); Single and Song of the Year for “My Church”; and New Artist of the Year. Morris only receives one nomination for Album and Single of the Year, but can receive additional trophies as producer.

Carrie Underwood is a first-time nominee in the Entertainer of the Year category. She also received nominations in Album (Storyteller); Musical Event for “The Fighter” with Urban; and Female Vocalist of the Year, which she has won three times (2006-2008).

Keith Urban, who has been a nominee every year since 2004, received four CMA Awards nominations in 2016 including Entertainer, which he won in 2005; Male Vocalist; Album (Ripcord); and Musical Event of the Year for “The Fighter,” featuring Underwood. Urban only receives one nomination for Album of the Year, but can receive an additional trophy as producer.

Winners of The 50th Annual CMA Awards will be determined in a final round of voting by eligible voting CMA members. Ballots will be tabulated by the professional services organization Deloitte & Touche LLP.