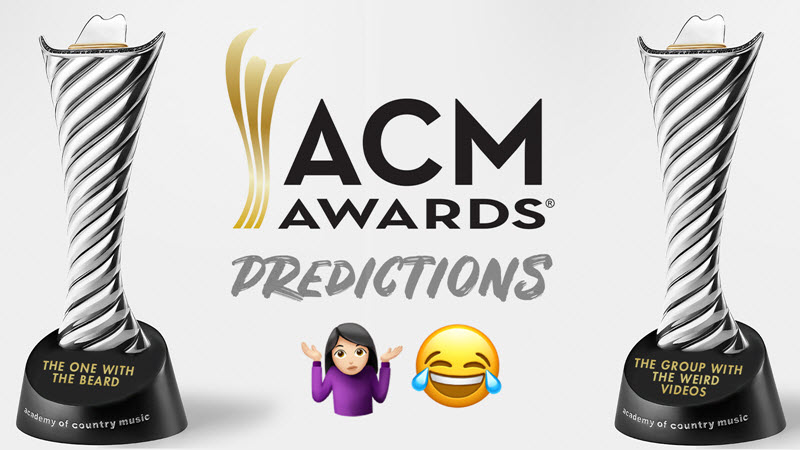 The ACM Awards are tonight – and I might be a little too excited in all honesty. So I thought, “What better way to celebrate than to predict the winners and rub it in everyone’s faces when I’m right?” So, here we are.

Entertainer of the Year: I would honestly be surprised if Chris Stapleton didn’t take the W on this one

Male Artist of the Year: Keith Urban is one of the biggest names up for this one, so I’d say him.

Female Artist of the Year: Carrie Underwood 1000% deserves to win this category. She’s been here for years and is at the top of the food chain.

Duo of the Year: Florida Georgia Line, hands down! If not then, it’ll have to be Dan + Shay.

Group of the Year: Midland made some pretty big waves with Drinkin’ Problem, so probably them?

Album of the Year: Kacey Musgraves’ Golden Hour. No doubt about it. That album has been played nonstop by music fans across all genre fan-bases.

New Female Artist of the Year: I’d love to see Carly Pearce win this. She’s got such a beautiful voice, I really can’t think of anyone who deserves it more.

New Duo or Group of the Year: High Valley! I can see them going really far in their careers, and it would be so cool to see them take this home.

Video of the Year: Tequila was such a beautiful video. I know so many people who don’t even like country music who were talking about how incredible both the song and the video were.

Music Event of the Year: Jason Aldean & Miranda Lambert absolutely killed Drowns The Whiskey, it has to be them!

Single of the Year: It’ll probably be Florida Georgia Line’s Meant To Be (as usual) but I’m really hoping for Dan + Shay’s Tequila!

Song of the Year: Again, it’ll probably be Meant To Be. That song has been played on every radio station a million and one times.

How accurately can someone who knows NOTHING about country music predict the ACM Awards? We decided to put Cat to the test again this year and find out.

Cat’s Picks for Winners (and the reasons for her picks) are:

Entertainer of the Year:  Imma go with Jason Aldean. I don’t know why.

Female Artist of the Year: Kacey Musgraves. I want to be her.

Duo of the Year: FGL I don’t know what LOCASH is…

Group of the Year: Man I apparently don’t listen to groups at all. Old Dominion?

Album of the Year: Stapleton all day.

New Male Artist of the Year: How is Luke Combs here? I’ve known about him for a while. I don’t recognize any other names here.

New Duo or Group of the Year: why is this a category if duo and group are their own separate categories? How about Midland? Do they have a chance?

Video of the Year: Babe. We love Sugarland!!

Music Event of the Year: still confused by this category but Dan + Shay because I read it was will Kelly Clarkson and she’s the Bomb dot com

Song of the Year: Stapleton because he’s got like 6 nominations and has to win a bunch, right?

The ACM Awards are tonight - So I thought, “What better way to celebrate than to predict the winners and rub it in everyone’s faces when I’m right?'Click To Tweet

Here’s a reminder that we’ll be live-tweeting and predicting leading up to, during, and after the show so if you’re going to be missing it, make sure to follow us on Twitter (https://twitter.com/acountry) so you get all the updates as they happen! And be sure to tune in to CBS at 8PM ET tonight!