The CMA Fest 2019 lineup features hundreds of Country Music artists performing on multiple stages throughout downtown Nashville Thursday through Sunday, June 6-9. CMA Fest is a one-of-a-kind festival with artists donating their time to perform so a portion of ticket proceeds can directly benefit high-quality music programs across the country through the CMA Foundation. A limited number of four-day passes for the nightly performances at Nissan Stadium are still available at CMAfest.com or through the CMA Box Office at 1-800-CMA-FEST. 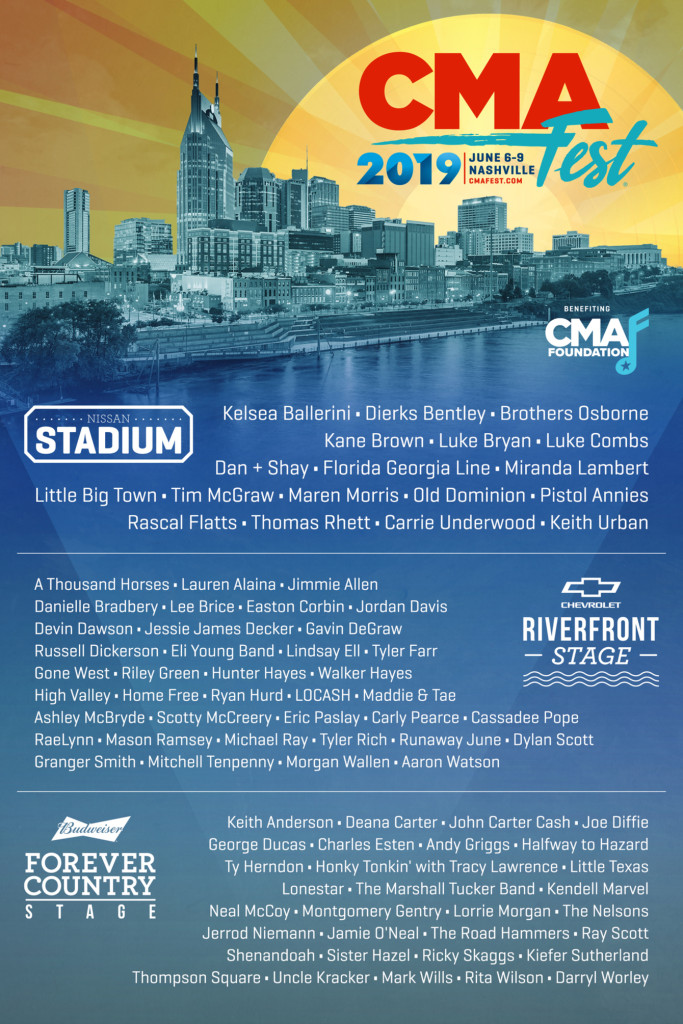 Outdoor daytime stages including Chevy Riverfront and Budweiser Forever Country are free and open to the public. All artist lineups are subject to change.  Additional stage lineups, Xfinity Fan Fair X activities, and more will be announced soon.

The Ultimate Country Music Fan Experience™ began in 1972 as Fan Fair®, which drew 5,000 fans to Nashville’s Municipal Auditorium. Now in its 48th year, the legendary festival has become the city’s signature Country Music event that hosts tens of thousands of fans from all 50 states, Puerto Rico and 36 international countries. In 2018, CMA Fest featured 11 official stages with hundreds of artists performing—all to benefit music education. CMA Fest is a one-of-a-kind festival with artists donating their time to perform so ticket proceeds can directly benefit high-quality music programs across the country through the CMA Foundation. CMA Fest is filmed for an ABC Television Network special, with 2019 marking the 16th consecutive year the event has been filmed for television, a feat no other music festival has achieved.