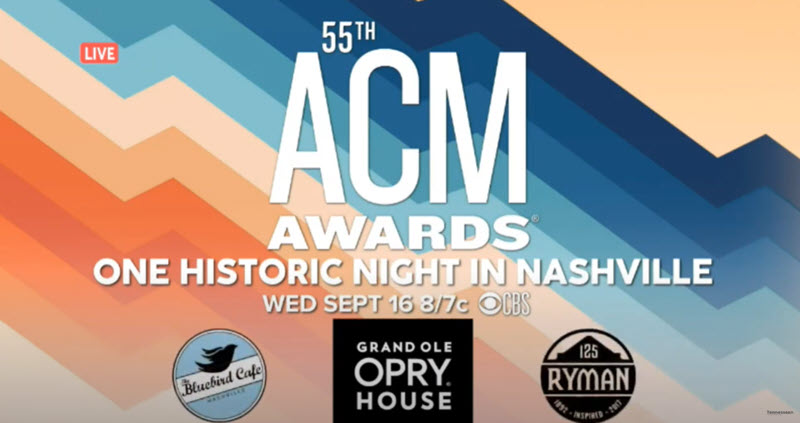 The 2020 ACM Awards are being moved to Nashville and will broadcast live September 16 on CBS. As announced by Nashville Mayor John Cooper, the rescheduled date, hosted by Keith Urban, will include performances from the Grand Ole Opry House, the Ryman Auditorium and the Bluebird Cafe. A decision on whether audiences will be present will be made later.

This will be the first time the ACM Awards have been held in Nashville.

Excited to announce that the 55th #ACMawards will broadcast for the first time from Nashville’s iconic @opry House, @theryman & @BluebirdCafeTN! Mark your calendars and join us on Wed, Sept. 16 at 8/7c on @CBS. pic.twitter.com/UoYImyxL9j

“While we were disappointed to postpone our April show in Las Vegas, we couldn’t be more thrilled to host the rescheduled 55th ACM Awards in the home of Country Music for the first time in the Academy’s history,” said Damon Whiteside, CEO of the Academy of Country Music. “First and foremost, we want to ensure the safety of our artists and industry, and to ease the burdens of traveling large teams; therefore, we decided to bring the ACM Awards to them this September in Nashville. Now, more than ever, is the time to bring our community together to honor the best in our genre, and there is no more special place to do that than three of the most revered venues in Country Music – The Grand Ole Opry House, The Ryman Auditorium and The Bluebird Cafe. A huge thank you to these historic venues and to the state of Tennessee and city of Nashville for all of the support in making this a reality!”

“Tennessee is honored to be a part of this historic event,” said Tennessee Governor Bill Lee. “Showcasing the talent and musical heritage of our state is always a source of pride, and it couldn’t be more valuable than this year. On behalf of all Tennesseans, I want to thank the Academy of Country Music for bringing this event home.”

“Country music has been our voice and our companion through so many difficult times and now it is our comfort as we confront and defeat the coronavirus,” said Nashville Mayor John Cooper. “I’m excited to join country music fans worldwide to celebrate with the Academy of Country Music and artists that uplift and inspire us all in these extraordinary times. And I look forward to the day when we can safely welcome visitors back to enjoy all that Music City has to offer, including over 160 live entertainment venues with the best country music shows in the world.”

“We are delighted to host the 55th ACM Awards and make history alongside the Academy of Country Music as the show comes to Nashville for the first time,” said Scott Bailey, President of Opry Entertainment Group. “We look forward to sharing this moment with our friends at The Bluebird Cafe and are pleased that fans will have the opportunity to experience the most famous stages in country music in such a unique way.”

As always, the health and safety of the artists, fans, industry, staff and partners is of the utmost importance. All guidelines set forth by national, state and local health officials will continue to be closely followed and implemented during the production along with additional safety measures to be instated by dick clark productions and the Academy of Country Music.

FEMALE ARTIST OF THE YEAR

MALE ARTIST OF THE YEAR

DUO OF THE YEAR

GROUP OF THE YEAR

NEW FEMALE ARTIST OF THE YEAR

NEW MALE ARTIST OF THE YEAR

SONGWRITER OF THE YEAR*(Off Camera Award)